In my garden in the rain the hellebores are in bloom. These lovely bell shaped flowers face downward in nature in a wide variety of colors and internal configurations. It’s calming to photograph flowers and to realize that nature carries on. Flora worries on a different time scale about some of the things that make us fauna unhappy. These flowers have naturally selected for beauty, and there are worse things.

A collector just ordered a copy of my Hellebore Stems (shown below). Originally, I shot the hellebores on a white background. To print the image on Moenkopi Kozo Washi I added a scanned paper background with a texture overlay. The technique is explained in my forthcoming book, which is tentatively titled The Way of the Digital Photographer and due to be published in mid-2013. 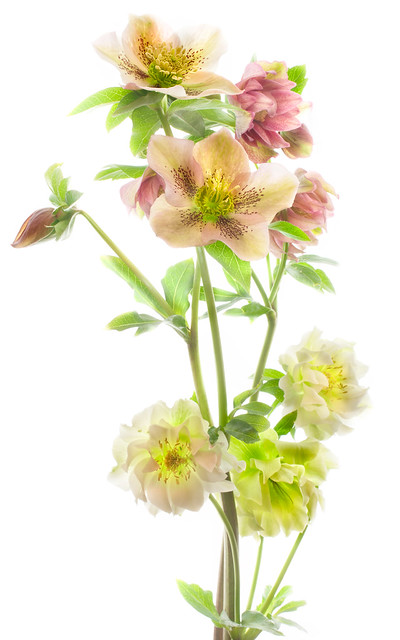 My idea with this shot was to use the same technique as I did with my Cherry Branch on White—using a group of Hellebores. In some respects these flowers are a tougher compositional target than the cherry branches—and you don’t have the immediate visual associations with cherry-blossom goodness to draw upon.

To make this photo first I cut the Hellebore stems from our garden. I placed them upright in a vase, and carefully arranged them against a light box placed vertically. Note that if I had shot against a normal white background (rather than the illumination of a light box) the background would have seemed a dull off-white or gray, rather than the striking white in the photo.

With the camera on a tripod and a macro lens in place, I shot a number of bracketing exposures, all biased to the right side on the histogram (overexposed). You’d expect a right-biased histogram with so much white in the photo, but I continued overexposing way past the normal range. I also did a little light painting as fill on the two larger blossoms.

In Photoshop, I combined the bracketed captures, starting with the lightest one as the background. 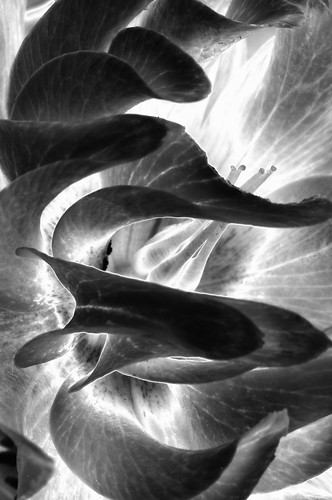 Solarization in photography reverses blacks and whites. Also called the Sabattier effect, in the chemical darkroom solarization was achieved by exposing an already exposed negative or print to light before development was finalized.

In the Photoshop darkroom, there are of course a number of ways to achieve a simulated solarization effect; the solarized (and converted to monochrome) version of Hellebore Curves is one example. 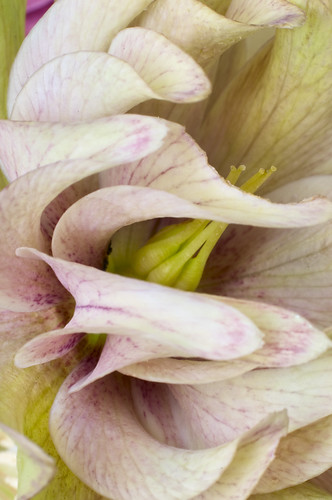 Flowers are beautiful—although why they seem so beautiful to us humans is an interesting question. But when I photograph flowers close-up, like this tiny Hellebore, I am not looking to document that beauty. Instead, I am trying to create an interesting abstract composition that uses shapes, lines and (yes) curves to evoke the ideal flower while maintaining a sense of mystery and novelty.

100mm macro, 1.6 seconds and f/22 at ISO 100, tripod mounted, photographed in the calm natural light of morning with the Hellebore part of a medley in a shallow pan of water. 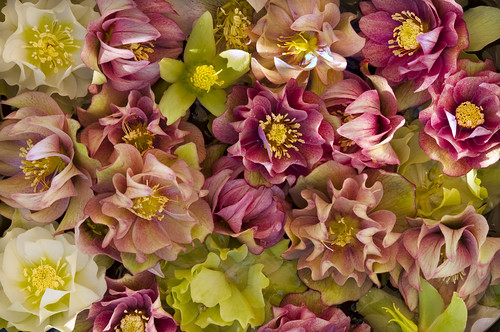 Like Flower Medley, I photographed these Hellebores looking straight down. The Hellebore blossoms from my garden were floating in a pan of water. The pan was lined with black vinyl. 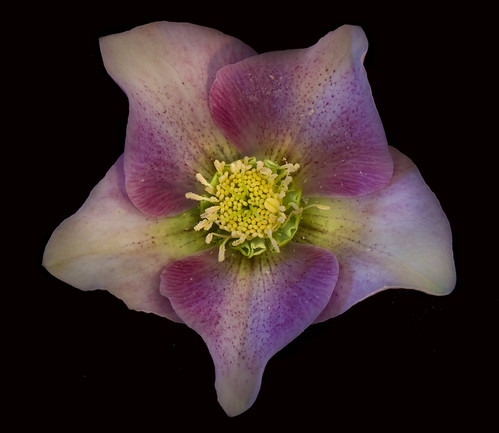 Check out Hannah Theim’s interview with me on Photo.net. The interview covers alot of ground, and concludes with a flower photography “assignment” for Photo.net members. 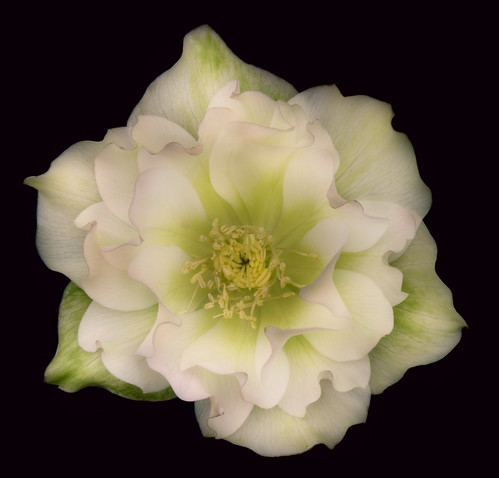 Hellebores are delicate flowers that bloom close to the ground in partial shade. They are one of our first flowers of the year.

This almost-all-white blossom was growing near our front gate. I cut it, and then Phyllis helped me mount it on black velvet using a pin.

I shot straight down, using my Zeiss macro lens, and combined four exposures from two to eight seconds (at f/22 and ISO 100) to capture the entire dynamic range in the petals. 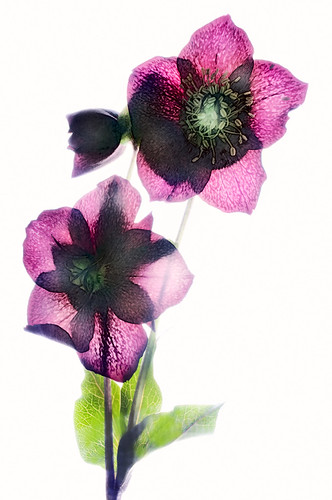 The image above was the first version of this photo. I used a flourescent light table as my illumination source, and overexposed for transparency. I combined three different exposures, each with a different shutter speed but the same aperture, to get the effect I wanted (see exposure details below).

Lately, I’ve become interested in photographing flowers either on a white background (because backlit transparency of flower petals is beautiful) or on a black background (because the high contrast with the flower makes color values pop). When I can, I’ve created both white and black versions. Sometimes photographically, but more often using Photoshop inversions, as with the hellebore inversion of the original image below: 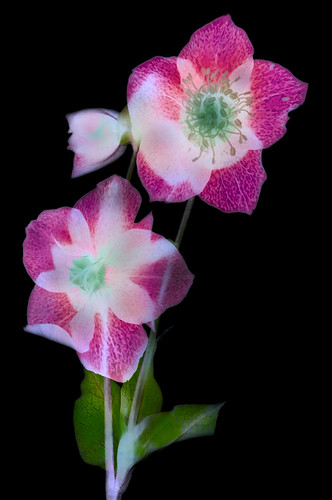 Some other black and white flower pairs: Faerie Bouquet and Faerie Rose on Black; Anemone Japonica and Anemone on Black; Dawn Chorus Poppy on White and Black. 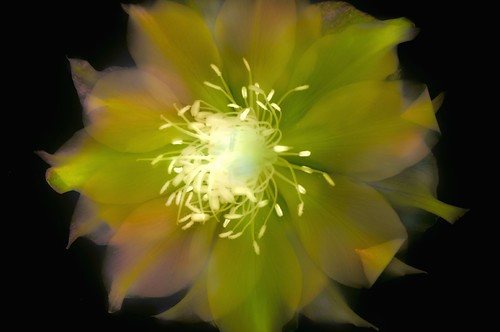 Mike said he wanted to learn a little more about how I post-processed photos. So he drove down the freeway in the squishy weather and we spent a fun and happy hour or so transforming this photo of a hellebore, originally shot straight down on a light box with my 85mm perspective correcting macro lens. 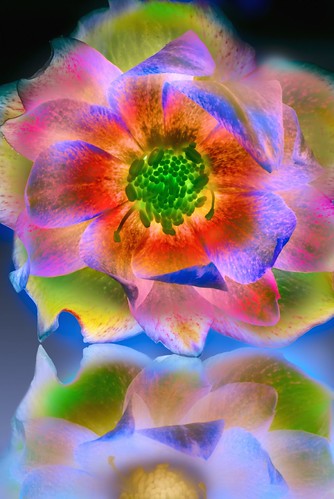 The original photo of this triad (immediately below) is a double hellebore blossom. It’s one of the first blossoms from the second year blooms of these special hellebore plants, hybridized by Barry Glick of Sunshine Farm and Garden, the self-styled “Hellebore King.” 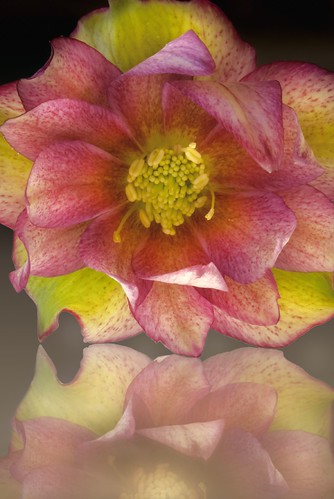 The more or less accurate colors of this flower (above), photographed in my studio, are pretty nice I think. But Harold being Harold, I couldn’t resist playing in the digital darkroom. Here is the capture info for the photo: 200mm f/4 macro lens (300mm in 35mm terms), 1 second at f/36 and ISO 100, tripod mounted using a Kirk Mighty Low Boy.

I often get asked about the techniques I use to get effects like these (top and bottom). I’ve no desire to be mysterious about it. But the precise steps I use are different every time. It’s a process, when it’s working right, that feels like the image is calling out to me, and revealing the steps as I go along necessary to reveal the inner image. You could say that I am the image’s therapist.

There is some commonality in the techniques I usually use. I start by photographing (or scanning) for high depth-of-field and transparency. I then work on the image in Photoshop using a variety of blending modes with duplicated inversions of LAB channels. 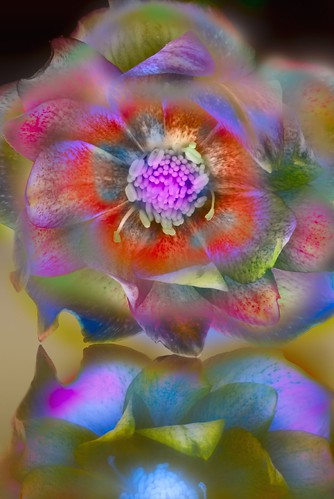 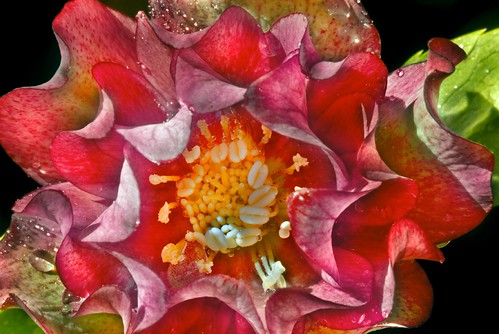 This is the first blossom of the hybrid double hellebore plants I got last autumn from Barry Glick, the self-styled Hellebore King, who runs Sunshine Farm and Gardens in West Virginia.

Hellebores have become one of my favorite flowers. Here’s an earlier photo of a rather more common helleborus from my garden. 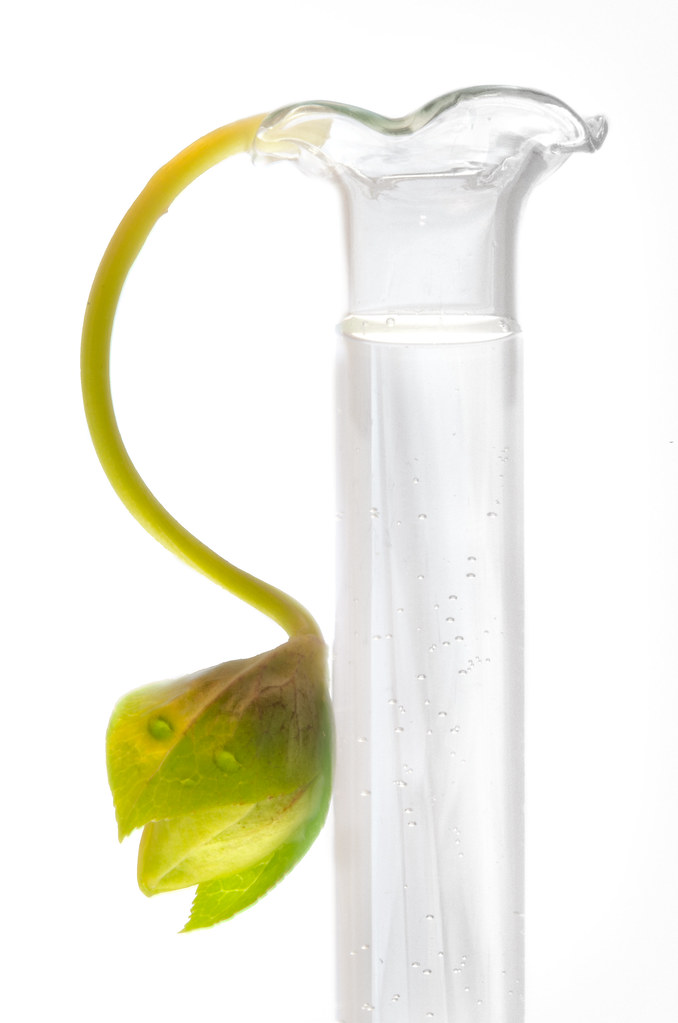 This is a shot of a hellebore blossom in a bud vase—or, as I like to think, escaping from the bud vase. The drops of water on the bud look almost like eyes, and the stem could be a tail.

I placed the bud vase on a light box, and used a light tent to create diffuse lighting around this still life. The photo was somewhat overexposed to enhance the high-key look.

In post-processing I duplicated the image, did a monochromatic conversion, copied the black & white version over the original, and used a gradient blend to desaturate the right side of the image.

Briefly noted: A wonderful profile of my work on Daniel Fealko’s PhotoFidelity blog. 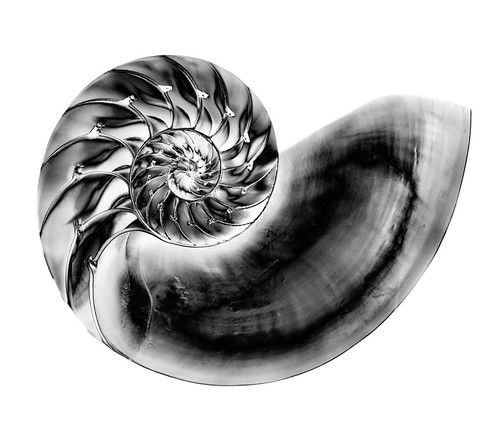 This a digital solarization of my black and white Nautilus shell image. The technique is explained in my new book Creative Black & White (to be published later this spring, but now available for pre-order). 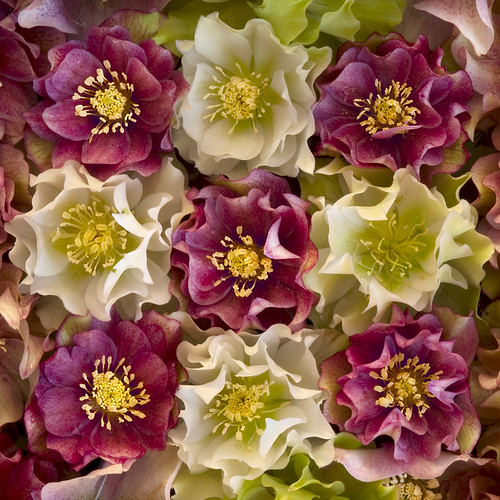 Phyllis arranged the hellebore medley I photographed earlier into a regular pattern, with the results you see.