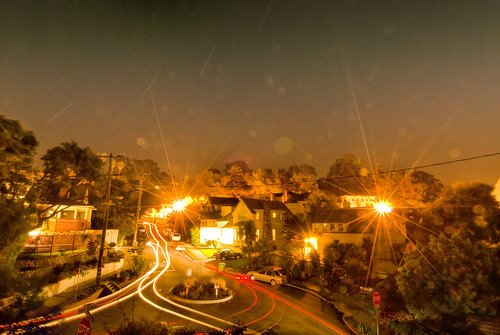 This is a 32 minute exposure from the roof near my bedroom looking east up San Fernando towards Arlington in Berkeley (location shown here).

There’s a fair amount of urban haze in the sky compared to my long exposures of the deep night landscape.

To get an exposure this long considering the ambient light I had to stop the camera way down. In addition to star trails, the polygonal shapes you see in the sky are refractions of the small diaphragm opening of the camera, although one comment on Flickr likened them to “rain”. Internal lens coatings prevent this kind of artifact from appearing in most photos.

The smaller the opening and the brighter the light source, the more you see these refractions (More Night Music in this story shows them at f/16 caused by the moon). Feature or bug? I’m not entirely sure, but you will get them in long exposures stopped down to f/16 or smaller when there’s contrast between a dark overall subject and a comparative bright light source (in this photo the street lamps).

I used AC power (easy at home with extension cords) and programmed interval timing, so basically this was one of a series of captures taken on auto pilot. This photo was taken with my old Nikon D200 because my D300 was in the shop. The repaired D300 just showed up on the front porch, so I’m finishing this story quickly to open the box!