Alone in the City 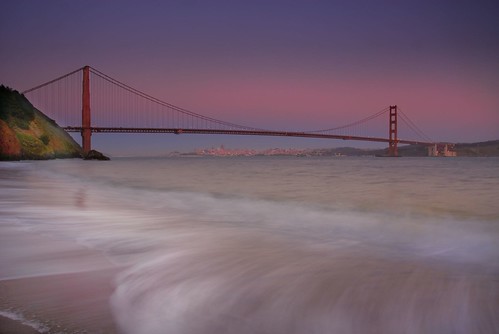 After a fun, but long, day photographing at Duxbury Reef and Bolinas with Mark, we went our separate ways. In the cool of the early evening, I decided to hike down to Kirby Cove.

As I followed the trail down and around the curve of the hill I was alone, buffered from the road and the tourists above in the Marin Headlands. It was shaded, and sunset was near. I felt like I had passed out of the normal paths of civilization.

Alone on the beach, I watched the sunset and the lights of the bridge and city come on. I set my tripod in the intertidal zone, and did a two second time exposure, grabbing the tripod back to safety before it could be tossed by a wave.

Watching the lights come on, I decided one is most alone in the city. In the wilderness when I am alone I usually feel exalted and special, but not lonely. When I am photographing at night from a wild place near the city, distant activity and light pollution makes me feel apart, and maybe even lonely, an outsider looking in.