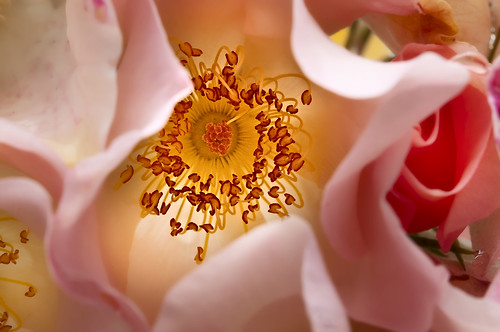 This is a grab shot of a backlit rose, found along the street—as much as anything with a 200mm telephoto macro mounted via collar on a tripod can be a grab shot. 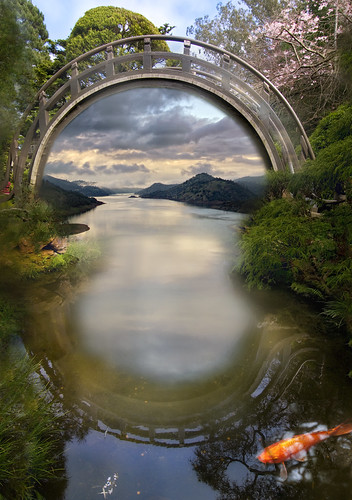 According to Bruno Ernst, M.C. Escher contemplated creating a “fascinating” fairy tale landscape in which a magic ornamental gate in our normal world opens to reveal a magical and different world. Escher took this conceit a little further in his plans, intending the magical world within the portal to be back in time. In one description of the work that he was never to actually make, prehistoric birds in the ancient world fly out through the gate to become airplanes in the external, workaday world.

Like Escher’s idea, this image is a version I’ve created of the fairy tale common in many countries of a magical portal that opens on a different world. If you are interested in the mundane details, the ornamental bridge is from the Hagiwara Tea Garden. The landscape seen through the bridge is Don Pedro Lake in the Western Sierra foothills, observed on a cold February morning.

The Koi in the foreground is not coy, but has been happily swimming in his ornamental pond. This decorative fish reminds me of the fish in Escher’s Three Worlds, a meditation on intertwined worlds. With the magical portal opening, the fish is wondering whether to stay a big fish in a small pond, or venture forth into the new, fantastical domain.

I plan to create other works based on a two-world theme as opportunities and ideas present themselves.