My goal with an image like Platala is to create a field that is so visually lush that it is distracting. This kind of image should be beautiful, with so many decorative elements, that no one is much concerned about where it comes from. Platala is not the creation of linear thinking, nor intended to appeal in a linear fashion. The making of Platala took flexibility of thought and process, as well as a central curvilinear shape, good music and drugs (I may be kidding about the drugs). It will repay consideration from the viewpoint of receptivity rather than as a straight linear progression from subject to post-production and publication.

I added some red carnation petals to the Hydrangea Blossoms composition. The result is a really emotive light box image: this piece says “happiness” to me. Progression 1, shown above, is an image designed to be visually to be read from left to right. Creating this kind of fantastic decorative imagery takes more than a little obsessiveness. Since the treatment involves faux curls, I like to think an interesting use of the image would be to print it as an actual wrapping—with virtual curves on the surface of an actual curve.

Click on the image or here to view it larger.

This batch of prints are signed. We’ll let them cure a couple of days, then they will be ready for their new homes! Printed on Juniper Baryta, with special thanks to Moab Paper, and to my collectors. Recipe: Take a dark, turgid decorative pond wherein dwell some not very Coy Koi. Throw in a probe wide-angle macro lens. Make sure the macro probe is water proof at the business end, with an LED ring light. Add a pinch of bread crumbs into the blackness of the water. Raise high the ISO of the camera. Wait for the fish to approach and try to eat the illuminated macro probe. Use the LCD to “see” what the lens sees, and try to track the eye of the fish as it glides just beneath the surface of the black waters, a sliver of a distance from the probe macro lens.

Yield: An impressionistic view of a literal fish eye, with the blackness of the pond universe extending to the infinite and the particulate matter in the water streaming by. These hydrangea petals were placed on a light box. I photographed them above with my Nikon D850 using the techniques explained in my Photographing Flowers for Transparency workshop, and below with my iPhone 6s. I think these little hydrangea flowers look almost like butterflies, ready to take off! Here are three images from the “Eye Candy” files. Nautilus and Inversion (above, click on the image or here to view it larger) is a single photo of two halves of a nautilus shell on a white (light box) background. A duplicate of the image was converted to LAB color, with the L-channel then inverted. The version on the while background was then composited with the version on the black background. Two curls were added, suggesting that the white version has a black verso, and the black version a white verso.

Homage to the Grateful Dead, shown below, combines various elements, including a light box floral composition and a scan of black lace. As I created this in Photoshop I was inspired by the classical Dead recordings I was listening to with my headphones. Petal World (below) is a multiple level light box composition, using inversions and fractilized copies of the original image to create a sense of depth via virtual “paper” curls. In honor of the quincentennial of the death of Leonardo da Vinci, there will be numerous exhibitions of the master’s work. His Vitruvian Man drawing in particular was subject to a lawsuit  to prevent it from hanging in the great show in the Louvre opening this month was recently rejected.  The grounds for the lawsuit were the fragility of the work, along with some snarkiness about France trying to “culturally appropriate” Leonardo from Italy. Does this kind of petty fighting ever end, or is it part of what it means to be human?

Vitruvian Man is famously a diagram of the proportions of the human body. I’ve wondered for a long time whether women have proportions too; hence my not-so-humble multiple exposure attempt at a “Vitruvian Woman”. This a photograph of a niche shrine in a garden outbuilding—a rather elaborate shed—at the Green Gulch Farm Zen Center, also known as Green Dragon Temple (Soryu-ji). This Zen Center is a Buddhist practice center in the Japanese Soto Zen tradition offering training in Zen meditation and ordinary work, nestled in a valley next to the Marin Headlands.

Dandelions and the Rolling Stones These two images are extreme close-ups of Dandelions magnified to about twice life size using the Laowa FF 100mm F2.8 CA-Dreamer Macro 2X lens. Did the Rolling Stones get it right about Dandelions way back when? Some two hundred miles north of San Francisco, California lies a wilderness area known as the Lost Coast. In these ever-more-crowded times, the sobriquet “Lost Coast” is often used with some affection to encompass an almost entirely empty wilderness; but back in day when efforts to populate this stubborn, obdurate, and unyielding shore came to nothing, the use of the descriptive phrase surely was indicative of a measure of defeat and unhappiness.

This is the most wild, undeveloped, and remote portion of the California coast, and it is surprising that it lies so close to San Francisco.

Starting in Orange County, Highway 1 (California SR 1) doggedly follows the coast of California north, passing through Los Angeles and Ventura Counties, the Central Coast, and Big Sur. In Big Sur, a land almost as topographically rugged as the Lost Coast, Highway 1 came near to meeting its match, but finally barreled through in a series of bridges built between 1919 and 1937. (You can click here for some of my images of Bixby Bridge along the Big Sur coast.)

Further north, above San Francisco, Highway 1 follows the Mendocino shore until the town of Rockport, where it turns inland to avoid the steep mountains of the King Range and the Lost Coast. Extending for about sixty miles, the Lost Coast region sits astride Mendocino and Humboldt counties, and administratively is mostly part of the King Range National Conservation Area (administered by the Federal BLM) and Sinkyone Wilderness Park (under the State of California). There’s one decent paved east-west road that more-or-less bisects the Lost Coast, ending in the settlement of Shelter Cove on a small plateau above the ocean (population 693 as of the 2010 census).

It is to be noted that the other roads in this area are often of the muddy, four-wheel-drive variety, and that “shelter” and “cove” are relative terms. There’s no such thing as a sheltered cove along this wild-and-woolly coast, no breakwaters, no piers, and no docking or anchoring in the water. The Lost Coast Trail (LCT) runs the length of Lost Coast, although the most common backpacking trip is north from Black Sands Beach in Shelter Cove to Mattole Point. With constant ups and downs, this is not a hiking trail for the faint of heart; an eye to the tide tables is essential, as portions of the trail are impassable at high tide.

The ocean here is a hungry sea. You don’t turn your back on it. Rip tides, sneaker waves, and undertow come standard. Walking along Black Sands Beach, the waves rumble on small-sized gravel, hissing like a thousand snakes on their way back to the ocean as though they’d like to take you with them, and it would be nothing, and you’d be gone in a snap. Backwoods communities of off-the-grid hippies have persisted in this rugged and inaccessible area. In the 1970s a lumbering operation that later failed to make inroads against the natural topography burnt an earlier generation’s homesteads to the ground to keep squatters out. This hasn’t stopped those who like living on their own at the world’s edge from keeping to a rugged lifestyle, and in recent years the area is apparently awash in marijuana money. How this will shake-out as grow-it-yourself small farm marijuana is increasingly ceded to pot agri-businesses is anyone’s guess. But this is a region used to booming and busting. The Lost Coast is one of those quintessentially remote American areas with a flavor all its own, formed by the rugged topography of the King Range where it meets the ocean as much as by those who have tried to occupy the land. I’d certainly recommend a visit, and getting to know the area—but this is not an area that gives up its secrets lightly or easily. It’s not that the Lost Coast is playing hard it get: it is hard to get there, both geographically and metaphorically. It is elusive in every way. Just returning from a photography trip to California’s Lost Coast, with images to post after I get a chance to process them. But meanwhile…

Falling into Spirals is a new composition in two versions I finished as we were heading out the door to explore the Lost Coast with no time to upload a blog story, and I am only able to post it now after my return!

Which version do you prefer?

Related stories: Spirals of the Heart; Through the Rabbit Hole. Spirals of the Heart Heart like a wheel, the heart is a lonely hunter, take another little piece of my heart, many are the songs, stories, and quotes and sayings related to the heart. This fantastic body organ that pumps and keeps us alive is a metaphorical stand-in for true feelings, love, romance, and the whole kit-and-caboodle. What a vessel for complexity, for misdirection, and for framing the contrast between true feelings and the rough steerage of the intellect.

I have heard many stories of the heart, but seldom have I seen one like this, constructed of spirals, and a veritable picture of the spirals of the heart.

I’ve been getting many questions about how my recent images are made, and can only say at this point that I am experimenting with some new techniques, and not ready to get into a technical discussion yet. But here’s a hint: to move from the Love of Spirals image shown at the bottom of Through the Rabbit Hole to this version, The Spiral Heart, I mostly used textures and background layers (more about these techniques in my course Photoshop Backgrounds & Textures).

Through the Rabbit Hole 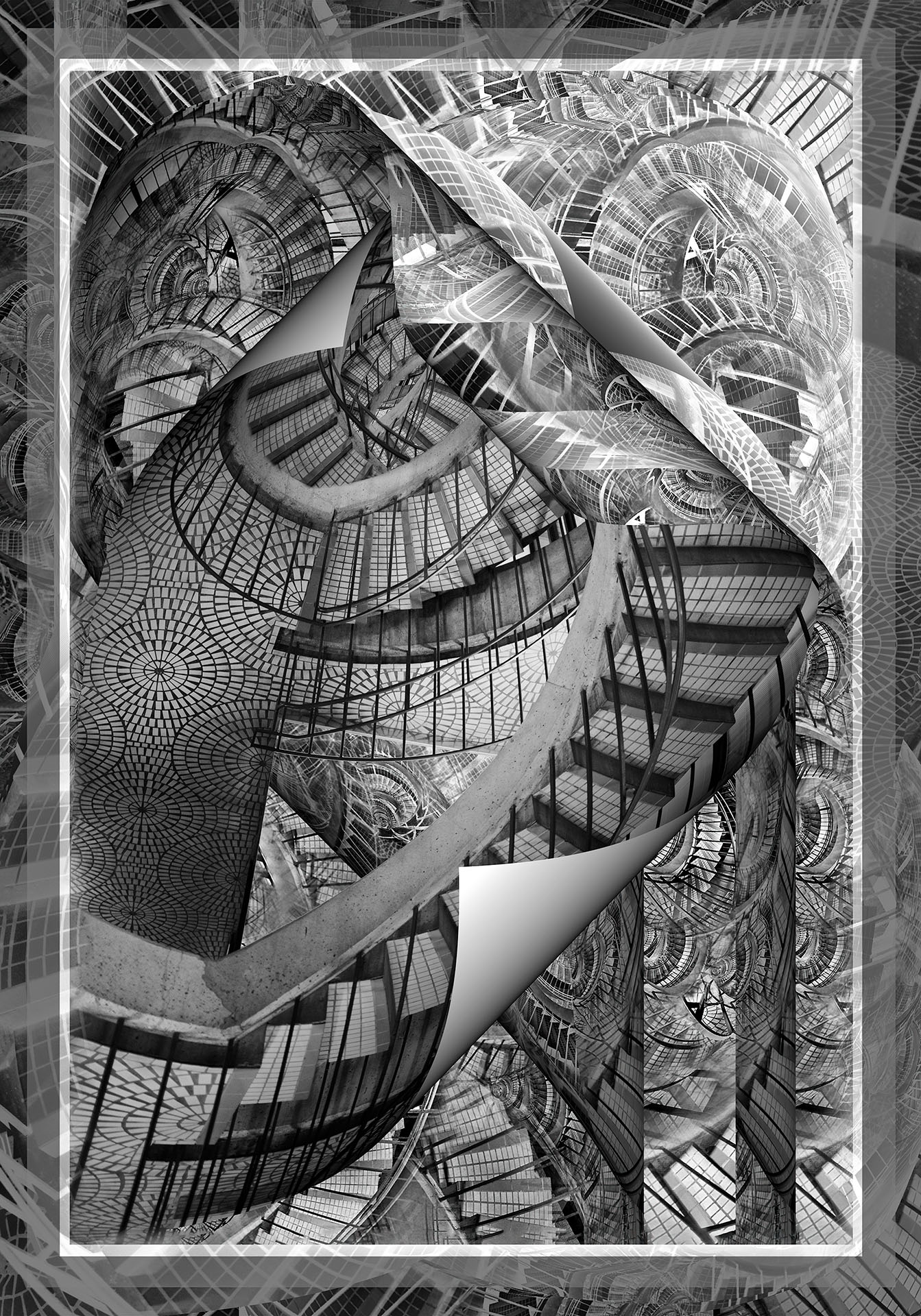 Through the Rabbit Hole © Harold Davis

It is easy to go down the rabbit hole when you love spirals! I have been dreaming of these stairs, over and over again, obsessively. And so I spend my “executive time” curling stairs virtually, twisting them to twist back on themselves, inverting them so that the inversions are overlays. Maybe once this is expressed and out on the virtual page, I will stop dreaming of spiral stairs!

On another note, at times I have felt I stood on the shoulders of giants and channeled great artists from the past such as Georgia O’Keeffe and Karl Bossfeldt. So this time it seems to be Escher! Carefully, I constructed this image. I composed it from two LAB color adjustments of a close-up photo of a Gaillardia flower (common name “blanket flower”). The finished composition was intended to resemble something you might see folded out of paper, with the idea of virtual origami. Hence the suffix: Gaillardia-gami.

Of course, if you look carefully, these folds would not actually be possible in “real life” (at least without a tear in the paper).