By Harold Davis | Published March 18, 2012
On my way home from photographing in the University of California Santa Cruz Arboretum I drove up the spectacular San Mateo coast (south of San Francisco). I reached the Pigeon Point Lighthouse about half an hour before sunset. 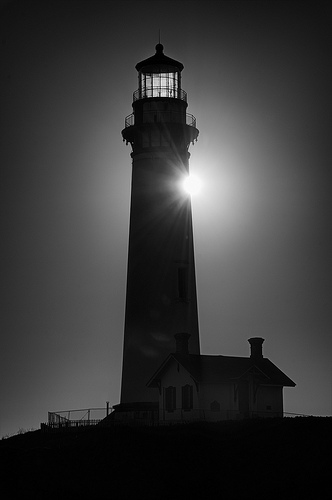 Pigeon Point Lighthouse marks a wind-and-wave swept shore of extreme beauty. The towering structure is badly in need of restoration. You can see in the photo that the building itself is largely fenced off.

As I parked the car, I realized that the high contrast between setting sun and the landscape would likely make photography a challenge. Then I noticed that there was one position, right near the southern edge of the cliffs above the ocean, where the lighthouse itself blocked the sun.

I scurried over to the cliffs edge, setting up my tripod in the shadow’s path with some difficulty. Achieving the right position meant going past the safety barricade. The path of the shadow was moving quickly, heading out over the cliffs edge towards the ocean where it would be impossible to utilize as a photographic element (without being able to hold still in mid-air, that is!).

I snapped the photo at 56mm, 1/2500 of a second, f/16 and ISO 100—and a moment later the shadow had shifted. These settings represent exposing for the sun, and underexposing the shadow portions of the image, which is what I had pre-visualized, along with a monochromatic conversion, to create an interesting backlit image.

This experience for me underscores the importance of improvisation in the field. You can do all the planning in the world—and fortune does favor the prepared mind. But in the end one needs to see—and seize—opportunities as they are presented, because photographic opportunities (like this one) are often fleeting.