These variegated iris are clearly friends. They look at each other with empathy, tendrils even apparently touching—or at least waving to each other! Inspiration is a demanding mistress

I never know when that moment of revelation is going to strike. It is kind of like an “aha” feeling—but a little bit different, both more and less. I’m plodding along, minding my own business, tending to the mundane affairs of life when all of a sudden a voice inside my head speaks to me and says, “There might be a picture here!” Life in a household with four young kids and two working parents is full of good reasons for denying my inner voice. I’ve work to do, images to license, books to write, bills to pay, kids to pick up! Life must go on!

But it is only by giving our inner voices some time and space to work their magic that we become the people—and artists—that we were meant to be.

Walking the boys to the school bus stop I passed a clump of white irises growing wild in the strip between the sidewalk and the street. The irises called out to me, try as I might I could not ignore them. After waving kisses to the boys when they got on the bus I walked home, got my pruning shears, and found my way back to the irises.

I laid the flowers out on my lightbox, fanning out the foliage, and shot straight down. The result you see is seven exposures at shutter speeds from 1/60 of a second to 1 second, all shot with a macro lens at f/10 and ISO 100. I combined the seven exposures using hand-HDR in Photoshop and Nik Software’s HDR Efex Pro.

A background made in Photoshop from scanned paper was then added to complete the composition, giving the image a touch of an old-fashioned botanical look: old and new combined in an unusual way. 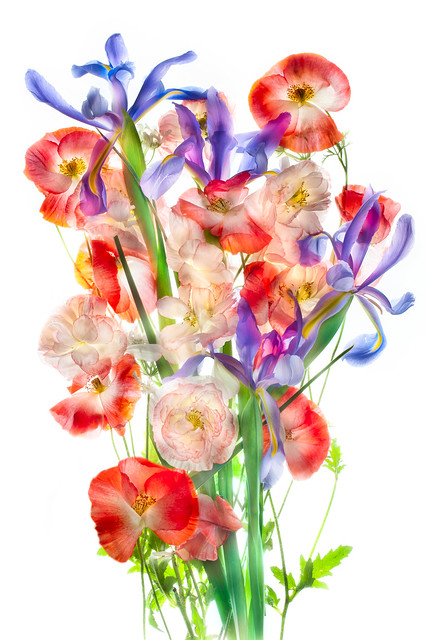 The Papaver Rhoeas in my garden called out for some complimentary colors, so I added some store-bought Iris. I photographed the combined composition straight down on my light box, using a macro lens from a distance and eight exposures.

As usual with this kind of image, the exposures were biased to the high-key side, with the sequence starting at the darkest image (the correct exposure, according to my light meter).

I needed some depth-of-field because the Irises had some depth, but not a great deal, so I selected f/11 for my aperture. At ISO 100, the exposure sequence went from 1/30 of a second to 4 seconds.

Recombining these exposures was an issue of using layering and painting techniques in Photoshop. I started with my lightest layer, the one shot at 4 seconds, and where there was not enough detail I layered a darker exposure on top of it, painting it in very selectively. 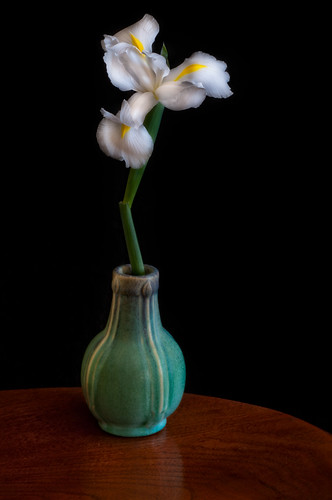 Here’s another floral image, this one in a much more classical style than Floral Impressionismo.

I lit the white Iris from left and right, using diffuse sunlight controlled via shades and blinds. I added black foam core board to cut out any unsightly highlights. The fancy lighting term for this arrangement is that these boards were used as “Gobos”—meaning they go between the light and the subject. Since I was setup and enjoying photographing flowers on a white background, I decided to add these partially transparent white Iris to the mix. I originally got this cool Iris ensata ‘Azuma-kagami’ as a bare root plant from White Flower Farms, planted it in my garden, and forgot about it. Yesterday, we saw this flower. It struck me as surpassingly beautiful, and I photographed it yesterday and today in studio.

For this shot, I photographed the Iris ensata ‘Azuma-kagami’ (I do like how the name of this flower rolls off my tongue) vertically with a light box behind it. I lit the flower from the front with a tungsten spot equipped with a diffuser and barn doors.

To make the photograph, I used my 85mm perspective correction Nikon lens. This is a really neat hunk of glass, but entirely manual. You even have to stop the diaghram down manually with a push button when you’re ready to make the exposure.

The base exposure on the Iris ensata ‘Azuma-kagami’ is (at ISO 100) 3 seconds and f/48 (one of the nice things about this lens is how far it stops down). I layered in a second, darker exposure for parts of the flower at 2 seconds (still at f/48).

The Iris That Bloom in the Spring It’s great to have Iris blooming in my garden again. This is an extravagantly beautiful flower. Once established, it keeps on multiplying. (A recent query I read in a gardening column was about how to slow down irises from multiplying over time. Answer: You can’t. Thin the flowers, and the ones you can’t give away it is morally OK to compost.) Here’s the same Iris photographed through the leaf with a flash (scroll to the bottom), and some of my earlier Iris photos.

Enough with the Irises! “I enjoy regularly reading your photoblog, and have learned much about digital photography from your book [Digital Photography Digital Field Guide], but enough with these iris pictures. Some of them are pretty, I grant you, but aren’t you getting bored with them?”

Well, I probably will never get bored with photographing Irises and other flowers, but I can take a hint. (OK, not a hint, but a big, fat nudge.) Also, maybe I am reaching a point of iris overload.

So this post will be my last Iris post for a while. And a special thanks to all the wonderful folk on Flickr who have said such nice things about my Iris set! (Click on an image in the set on Flickr to read the comments.)

If you really don’t want to see flowers, instead of looking at these Iris photos, you can always look at my stories about my recent awesome roadtrip instead of these! More of my Iris photos here, here, and here! Irises here, there, and everywhere. I am enjoying photographing this very special flower, it is one of my favorites.

The Iris petals in this photo remind me of wings. Very appropriate. In Greek mythology, Iris was a winged messenger for the gods. I am continuing to photograph the irises today. They are so beautiful, and look good when positioned with a red lily for background color.

This one reminds me of a tongue. Is this attractive Iris sticking out a tongue at us? Whale Song of the Iris, photo by Harold Davis.

Phyllis got me some fresh Iris (from Trader Joe’s, not our garden!) and I’ve been photographing them as they open…