Another View of the Astorga Cathedral

Here’s another view of the Astorga Cathedral, this one using my iPhone, and processed using the Waterlogue app. On the main trunk route of the Camino de Santiago, the Camino Frances, Astorga is a small city that sits on a hill. When Celtic culture dominated the area, there was an Astorga. The Greeks came here. An important Roman city, Christianity was adopted a bit earlier than in most of the empire. There’s a somewhat dubious myth that the knights of Astorga wanted to voyage to the holy lands with the purpose of bringing back the Virgin Mary to spend her retirement years in Astorga. Well fortified naturally, the junction of long-haul trail routes helped make Astorga important in Roman times, and more so with the advent of the Catholic church.

I’m staying in a hotel on the main tradional square of Astorga. The square is surrounded by arcades. When it begins to get cool in the evening, the cafes open up, everyone comes out and the square bustles. A mechanical figure high above city hall strikes a clock, tolling the hours. Dinner starts about 8:30. It’s a different way of living.

I feel a bit like an alien dropped here, with the city (the hotel desk clerk told me this is really a town, not a city) doing things the way they’ve been done since before the dawn of recorded history. I’ve enjoyed a day off to explore Astorga; this will hopefully allow some blisters to heal up a bit before I resume walking tomorrow.

A standout attraction in Astorga is Gaudí’s Palace. Antoni Gaudí was commissioned by the local bishop (who was a friend) to design the Episcopal Palace of Astorga. This is the only Gaudí building outside Catalonia. The style is neo-Gothic, with Gaudí experimenting with the Gothic idiom to make it his own in subtle and not-so-subtle ways.

I enjoyed this building quite a bit, although they wouldn’t let me take my tripod inside. Gaudí’s Palace houses a museum with artifacts related to the Camino de Santiago, and was included in the original application to give the Camino its Unesco world heritage designation.

Putting the Lion in Leon

Castilla y León is a semi-autonomous region in Spain, like Galicia or Catalonia. The city of León, spelled like my middle name “Leon” but with an accent aigu over the ‘o’, is the capital of the province of León that makes up the León half of Castilla y León. In any language, “Leon” or “León” means the animal, the lion. That’s my middle name, hear me roar, and folks around here like those checking my passport at hotels are very appreciative of  it. Harold Leon Davis. Anyhow…

The city of León is proud of its leonine status, as you can see in this beloved-by-children statue of a lion climbing out of a storm drain in León’s central square (below). And, if you need to post a letter in León, it is quite possible you might need to “feed the lion” (bottom image). At the outset I must stipulate that a spacious room in a luxury 5-star hotel is a great place to organize for a longish walk on the Camino de Santiago. The Parador at the Convent of San Marcos in León, Spain, where I stayed before I began my Camino, meets this description of “luxury”. I stipulate to this luxury a bit abashed: the concept of a pilgrimage and the life of ease don’t mesh together so well. Traditionally, a pilgrimage involves penitence and pain—the blisters currently on my feet satisfy this requirement, alas.

According to the Wikipedia, the “convent of San Marcos is one of the great architectural jewels of the Spanish city of León.” It’s featured as the luxury stop the protagonist treats his Camino cohort to in The Way, the Martin Sheen and Emilio Estévez film that has brought so many pilgrims to the Camino de Santiago.

The Convent of San Marcos has been (as the name implies) a convent, a monastery, a hospital, and a way-station for pilgrims. My photograph of one of the interior cloisters is shown below. In its current incarnation as a newly renovated luxury hotel, part of the Parador chain, there is something tawdry and abominable about the place. It’s geared for the luxury bus tourist trade. Easy listening American standards are piped via a too-high volume sound system into all the public spaces. They’ve gutted the classical atrium and replaced it with a modern interior structure, justifying this colossal design inanity with an exhibition of modernist Spanish art.

One can have second thoughts about privatizing a great historical structure for the benefit of well-to-do tourists. No second thoughts are possible about the awful design choices that were made during this renovation.

So, ready pilgrim one! Onward to the simpler life as a pilgrim-with-a-camera walking the Camino.

For well over a millennia, the Cathedral of Saint James has been the goal of a tireless—and tired and footsore—stream of pilgrims toiling along the various Caminos that lead to Santiago de Compostela. The Cathedral is shown here in the distance by the first light of dawn. It is “brought closer” since I used a 300mm telephoto focal length lens. 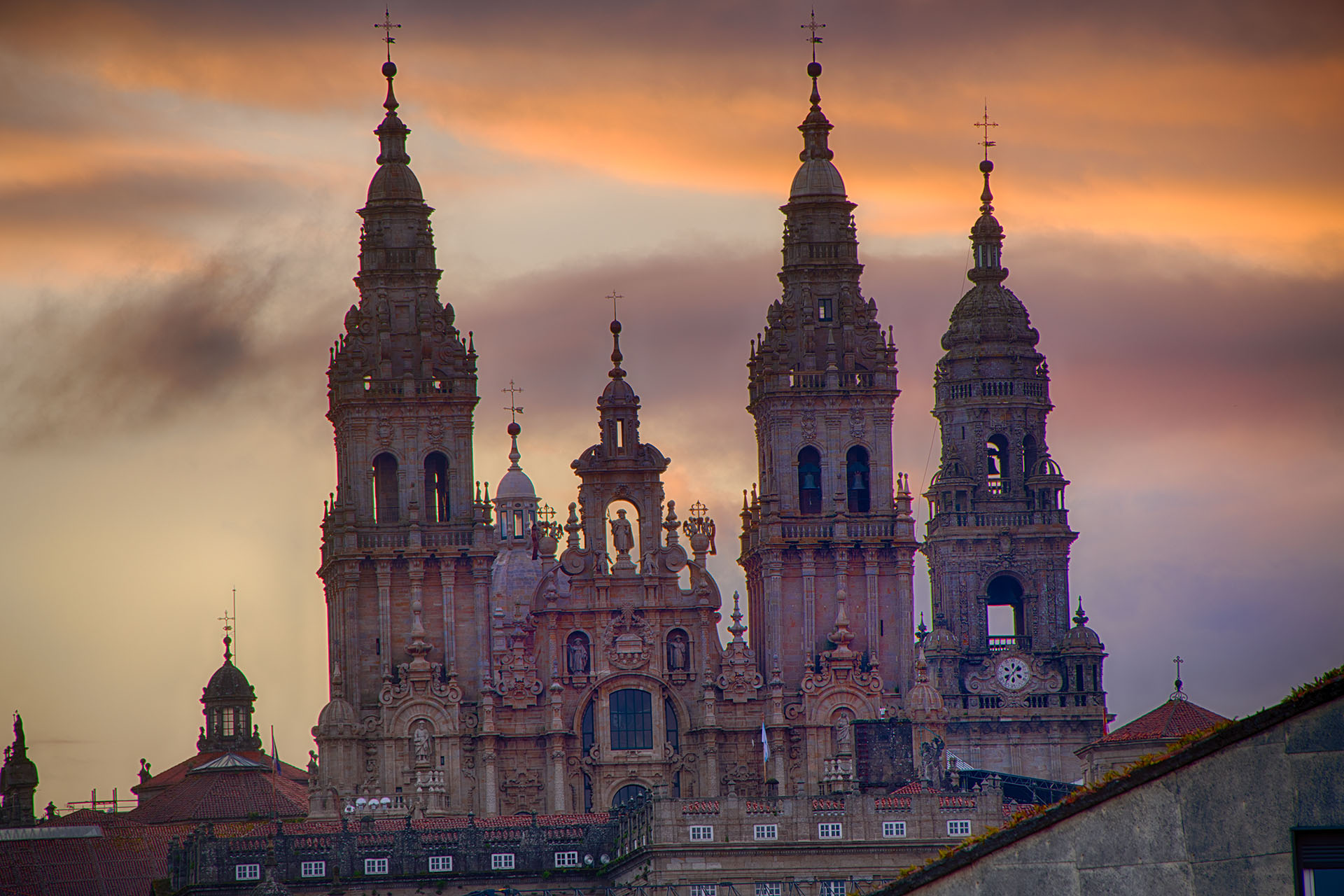 Garden along the Camino

Someone had built this garden beside the trail in the nook beside an old stone wall, with its rose trellis across a small spring. Now, half wild, the garden was reclaiming its heritage—and like the ancient land of the Camino was part way reverted to its natural state. Garden along the Camino © Harold Davis

Did the Serpent Get a ‘Bum Rap’?

I think the serpent may have gotten a bum rap. At the very least, there is some indignity to an honest snake for being depicted as a kind of lizard with front legs, and knotted into a pretzel shape. Where is Eve in all this, and why would she listen to this critter? Did the serpent get a ‘bad rap’? © Harold Davis

Seen Along the Way of Saint James

Here are a few random sightings captured with my iPhone camera on the Way of Saint James, specifically the Camino Portuguese, on my walk through southern Galicia towards Santiago. Above, the interior dome and chandelier of the Pilgrim Church—Capela da Virxe Peregrina—in Pontevedra. It was fun climbing to the top of the dome, which I did after making this photo and getting my Pilgrim book stamped.

Below, the alternate Camino passes through a tunnel under train tracks beside a small river. If the Way seems narrow in the photo, indeed it was! Tunnel on the Camino © Harold Davis

Finally, walking through the gritty outskirts of Arcade, a witch is seen rising before the moon on her broomstick. The circular moon is of course echoed in the heating unit that appears above the witch. There are literally hundreds of Roman bridges in Galicia, many used by or adjacent to the Camino Portuguese.

Some of these are more recent constructions on the Roman-engineered foundations, but with other the literal stones of the bridges date back millennia. The Oronelle Bridge, shown below, was built by the Romans, and is still quite usable,

It’s amazing to see the grooves in the stones worn by cart wheels and foot tread over the vast span of years! Inside Tui Cathedral and I Have a Bilbo Baggins Moment

Tui Cathedral is nominally the starting point for my Camino. This is where my pilgrimage begins. The distances are calculated from the doors of the Cathedral.

Inside, the Cathedral is a heady and eclectic blend of Gothic, Romanesque, and Baroque styles. In the image, the double organs across each side of the nave is something I’ve never seen anywhere else. In addition, the Cathedral was a frontier fortress with battlements, terraces, and a fortified cloisters, on active alert across the River Minho facing the “enemy” fortress  on the other side for centuries. This morning I had my “Bilbo Baggins” moment. A somewhat portly, middle-aged gent, I checked out of the hotel, leaving my key at the front desk, slipped on my pack and headed across the meadow to the trail. Oh, the moment was slightly spoiled when I had to adjust the lacing on my boots before getting started (hobbits don’t wear shoes of course).

The sky was gray with storm-wracked clouds and the forecast was for wet weather. Instead of worrying about a pocket handkerchief as Bilbo famously did, I wondered whether my the rain cover for my pack was handy.

Today I walked across the Ponte Rodo-Ferroviária de Valença (shown in the image) across the River Minho from Tui in Galicia, Spain to Valenca in Portugal, and back again. Other than a little signage, just as you might have in the US when leaving one state and entering another, there was nothing to show that this was once an international border. The old customs house and port of entry building on the Portugal side had been converted into a small art center and a music academy. I think when all is said and done, with whatever problems there are, there is no going back to a divided Europe. Both sides of the river were heavily fortified starting in Roman times. I stood on the very top of the massive stone ramparts of the Portuguese walls and stared across the river at the fortified hilltop town of Tui, the capital of one of the seven provinces that merged to form the ancient kingdom of Galicia.

Tomorrow I start north on the famous Camino Portuguese trail. This pilgrimage trail leads to Santiago de Compostela through Galicia from the south, whereas the better known and more trafficked Camino Francais pilgrimage trail comes from the north. I should be in Santiago in a little less than two weeks, and I am looking forward to it very much, although my feet are already a little sore and a bit worried about the proposition!