The Curve at the End of the Country Lane

I photographed Country Lane (shown below) adjacent to a castle that is fairly close by. The overall lighting, mood, and feeling of the image reminds me of Road Less Traveled (shown at the bottom, and blogged here). While the feeling may be similar, there is a difference in the meta-story this pair of images convey. With Road Less Traveled, a choice is presented, presumably in the life of the viewer, or maybe—more autobiographically—in my life. The exhortation to myself was to choose a path less taken, and embark on the life of an artist, to pursue beauty, rather than to follow the easier direction of a more conventional career. The appeal to the viewer is to consider carefully what is really important, and to make choices that are commensurate with their best possible life.

In contrast, Country Lane presents no choices. It’s as if everything is preordained. The path has already been chosen. But if you squint hard, you can see there is a curve at the end of the road, where country lane meets the horizon and vanishing point, with a slight emphasis of brightness.

What lies ahead, around the curve? That’s hard to say, and may be different for each of us. But my sense of the image is optimistic, as if it is saying that the best is yet to come. 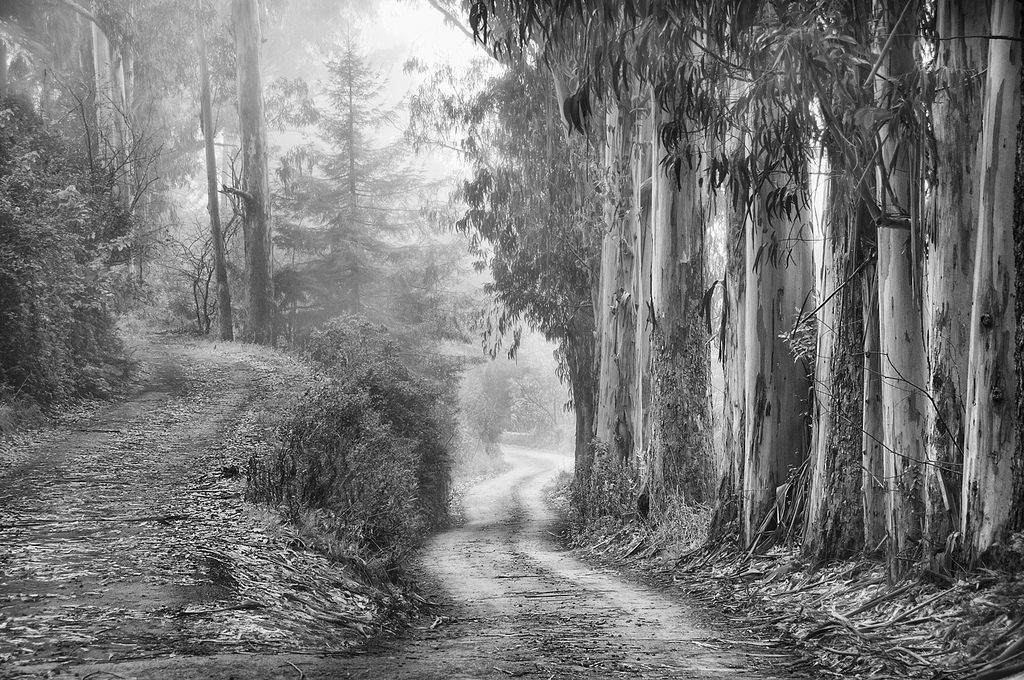 Today I photographed a marvelous train viaduct, built in the 1800s using the same engineering principles that the Romans used. The Himbachel Viaduct is still in use by trains today. Photographically, a structure this huge and out of scale with the landscape offers a real challenge in composition—figuring out how to be harmonious while still conveying the immensity of the site. Baden-Baden is a prosperous spa town at the edge of the Black Forest and near Germany’s border with France. A famous place to try to recuperate from tuberculosis in the nineteenth century, Dostoevsky lost his shirt at the casino in Baden-Baden. More recently, Baden-Baden has once again been favored by rich Russians. Within Schwetzingen Garden, the Temple of Mercury is an intentional ruin from the late 1700s. Built to romantically fall down, the question today is how to conserve a structure intended from the start to be a ruin.

Photographed as the sun rose with my iPhone, and processed using the Plastic Bullet, Snapseed, ImageBlender, and Photo Lab apps on my iPhone. Mercury to the Romans was Hermes to the Greeks. Messenger of the Gods (with winged sandals), God of medicine (hence the caduceus), travelers, thieves, and other assorted magical riff-raff. On good days I regard Hermes as a patron, and hope he helps keep me safe and happy as I wander. My bags are packed, I’m ready to go—so its the perfect time to work on some back images on my production machine. This castle shadow is from my recent stay in Heidelberg, Germany, photographed on a street as I wandered around after I gave my workshop. Bend in the Neckar River

On a great bend in the Neckar River, about 15 kilometers up-river from Heidelberg, Germany lies the town of Neckarsteinach. Four dramatic castles sit atop the crags overlooking the Neckar. Julian, one of my workshop participants, brought me here the day I was flying home, and together we explored the area.

From the top tower in the castle I shot a series of seven hand-held bracketed HDR exposures. Each exposure sequence had eight images. I used Photoshop to merge the seven sequences into a single panorama, which (doing the math) consists of 56 individual images! Since each capture was using a 36MP sensor, quite a bit of information has gone into this pano, and I am looking forward to printing it large.

Bend in the Neckar River in Black and White © Harold Davis

Related story: Check out the panorama I photographed overlooking a bend in the Dordogne River in southwest France.

Along the old Rhine River

After my workshop was over, Volker Haxsen (who assisted me at the workshop, and is quite a gifted person in his own right) took me exploring in the Rhine Valley. Volker told me that the Rhine has been navigated for thousands of years, since Roman times, and the channels have been straightened and broadened. The river used the meander much more with wetlands. These banks of the old Rhine have been preserved as park lands in places, and it is here we went with our cameras!

Path beside the Rhine © Harold Davis This is a photo of an engine-in-progress at Primo’s Garage, photographed during my recent Black and White Masterclass in Heidelberg, Germany, and used as in-class post-processing example. The other evening I strolled along Heidelberg’s Philosopher’s Walk with my camera and tripod. I stopped to make several photographs, including this exposure blend looking down on the Alte Brucke. Today I used the image in my Black & White Masterclass to demonstrate a fairly complete high dynamic range black and white (“monochromatic HDR”) workflow. I think the class was great at following along as this workflow involves a non-trivial effort and is definitely not for the faint of heart! The Great Hall is Heidelberg University’s magnificent historic auditorium, located on the first floor of the old University building in the old part of Heidelberg. It’s in the same building that houses the Heidelberg Student Jail. When my local friend took me to see the old University building, the attendant told us that the Great Hall was closed to the public as they were preparing for an event “unless one of you is press.” I reached for my wallet, and started to pull out my Nikon Professional Services (NPS) card—not exactly press, but good enough I guess to get us into the Great Hall!

Hohenzollern Castle, located in Swabia about 80 kilometers south of Stuttgart, Germany was home to the family that eventually spawned the emperors of Germany. Destroyed and rebuilt a number of times since its construction in the 11th century, the current version dates to the mid-19th century, where it was a conscious architectural folly and anachronism, modeled in English Gothic revival style, and after the chateaus of the Loire. It had been raining all week. On a gray day, I parked in the parking lot below the castle, and paid my 5 Euros fee. I ignored the shuttle bus, and schlepped my camera and tripod up to the entrance to the castle, maybe a twenty minute walk. It was sprinkling lightly, and as I entered the lower levels I looked up at the swirling mist with a few beams of sunlight coming through, and proceeded to capture a number of views with monochromatic HDR in mind.

Afternoon of the Faun 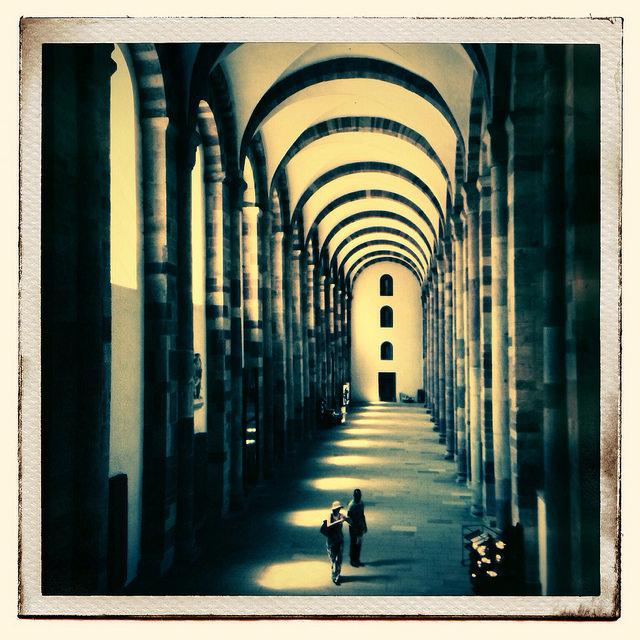