How Wide the Star-Filled Sky 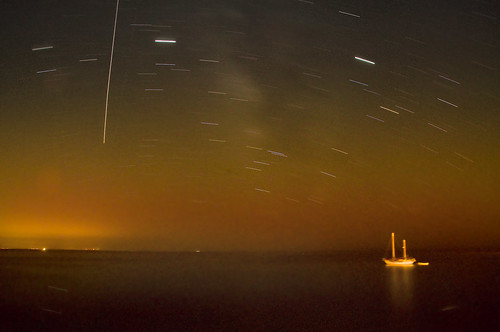 How Wide the Star-Filled Sky, photo by Harold Davis. View this image larger.

I took my older boys down to Santa Cruz for a couple of days of beach and boardwalk amusement park rides before school began. As night began to fall on the boardwalk, I got out my tripod and started work on time exposures of the rides and lights (some pix to follow).

After a while, a security guard came up to me and told me that tripods were verboten, and if I continued he would have to confiscate my camera.

Rather than the normal smart aleck reponse I would normally have made (e.g., “over my dead body”), I remembered I was with young kids and taking photos for fun. So I packed up my gear, and after a few more rides we headed out to the end of the Santa Cruz wharf.

The kids ran amok chasing seagulls and listening to the roar of sea lions while I snapped this roughly twelve minute exposure out into the inky blackness of the infinite sea and sky.

Of related interest: Surf and Stars.