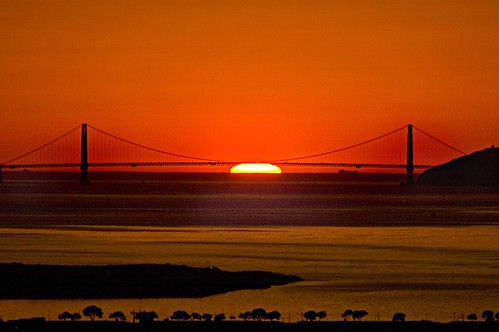 As marvels of engineering, suspension bridges are known for their use of compression and symmetry. The Golden Gate Bridge is also known for its elegant beauty.

I’ve been contemplating for months the possibility of creating a photograph that showed the sun setting symmetrically in the middle of the Golden Gate Bridge. But this is a project with considerable difficulties.

Depending on where in East Bay you locate your camera and tripod, this phenomenon will occur in sometime in late January or early February. To start with, there’s the big chance that the cloudy winter Bay weather will not cooperate, with the sun going down into a fog bank and not the center of the bridge.

You need a really long lens on a tripod to make this a successful photo. And, it’s almost impossible to expose for both the sun and the surrounding landscape. Sandwiching together several different exposures in Photoshop is dicey because the apparent movement of the sun is very fast (at this time of year) as it sets, and the multiple exposures show the sun at different sizes, and don’t really register together. (In case you can’t tell, I tried it!) Oh yeah, forget about any kind of automatic exposure metering, you want to set your camera on manual, and stop it down far below what your meter tells you to do. No matter how you expose things, the sun will blow your highlights way out–and look kind of weird like an egg dropping goo–until it goes way down.

More serious than any of these technical issues is the extreme danger of eye damage that can be caused by poking a long lens at the sun, and then looking through it. Ideally, you should review images in the LCD, not the lens.

I decided to photograph from Indian Rock, because it has a great head-on view of the Golden Gate, and easy for me to get to quickly so I can be back in time to help feed the boys dinner (the sun is setting at about 5:30PM).

Well, the weather at least has been cooperating this year. A few days ago, the setting sun framed the southern tower: 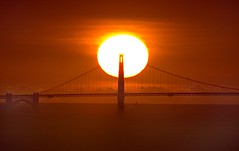 I kind of like that this image reminds me of Sauron’s eye in the Peter Jackson movies of the Lord of the Rings, but not scary in the same way.

After that, things started to speed up as the sun journeyed north:

In other words spectacular, but not quite centered. Last night, the sun was rolling down the suspension cables, like this: 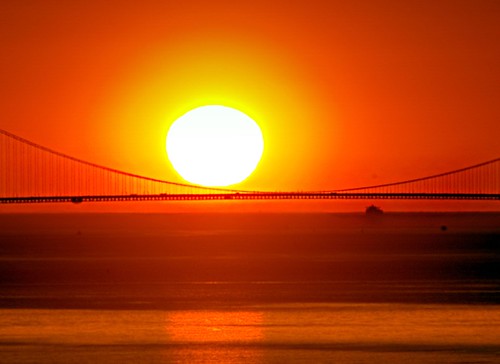 You’ll note that the sun moves north as it sets. So it’s constantly going down and to the right. The sunset that began with the “rolling” sun ended with the sun centered as it fell through the horizon under the bridge (I think this is my favorite of the sequence, which is why I am showing it twice): 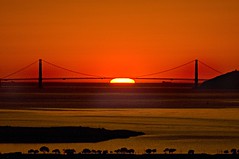 But the photo with it centered at the very tail end of sunset was from a day earlier: 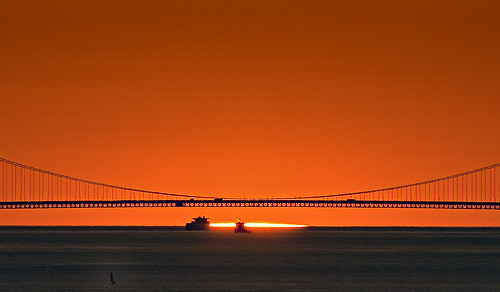 Well, so much for the taxonomy of one of my current obsessions: the phases of the setting sun in relationship to the Golden Gate Bridge from Indian Rock. It’s doubtful whether that photo in my mind’s eye–of the sun as a red ball above the roadway at a mid-point between the cables–is actually possible due to the sun’s trajectory and exposure issues when it is higher.

Anyhow, after the sun is down the landscape is still beautiful and worth photographing: 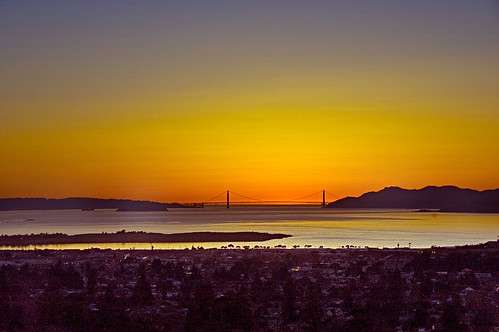 Of course, I’ll be going back again tonight. I just can’t resist.