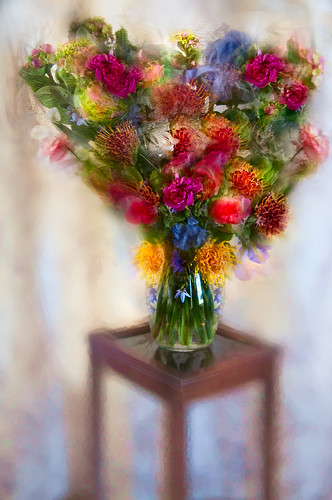 My idea in making this image was inspired by the floral still life compositions of the great Impressionist masters. In particular, Cezanne, Renoir and van Gogh came to mind. Using flowers purchased at the supermarket supplemented by the lavish blossoms currently growing in our garden, I created a bouquet and placed it on a small table in front of a curtain with a somewhat Oriental feeling.

I shot many variations of the image, intentionally throwing the photo out of focus. In particular, I did not want the details in the curtain to compete with the subject of my photo.

Taking care not to move the camera on the tripod, I also added some diffusion on some of the shots with a +1 close-up filter. I took things a step further by adding a sheer black nylon cloth to the front of the lens with the close-up filter. Stopped all the way down, you could see the pattern made by the fabric as well as the flowers.

In post-production in Photoshop, I used four of the versions I had shot. One of these was a black fabric version, which I converted to LAB. Inverting the L-channel turned the black dots from the fabric to white, which made them much more usable.

The first step was to combine the four images to create the combination of out-of-focus and sharpness I was looking for. Next, I tried a variety of filter effects. I ended up using filters from Nik Color Efex, Topaz Adjust, and Topaz Simplify, as well as Photoshop’s own Artistic Palette Knife filter.

Finally, to add just a hint of that van Gogh divine madness, I very selectively used the Photoshop Liquify filter to “swirl” a few parts of the floral arrangement.