The San Francisco Moonrise Adventure workshop on Saturday was a smashing success. Despite some unexpected logistical difficulties—due to a demonstration on Market Street—we settled into our Embarcadero waterfront location in good time. The moon rose mostly where it was supposed to, and is shown here over Port Oakland. The photo was shot under the Bay Bridge using my 300mm lens. I’ll be posting more photos of the moon interacting in complex and photographically interesting ways with the Bay Bridge itself! 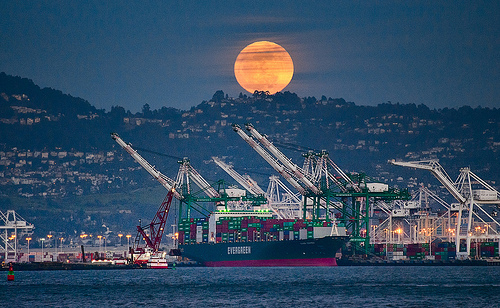 Not to take away from the workshop and how much fun it was, but unfortunately “smashing” applies to what happened to my van, parked near the Embarcadero in downtown San Francisco while the workshop was transpiring. The rear window was smashed. The bad guys got a briefcase with my iPad and the prototype of Botanique—currently, the only existing copy.

Well, we’re assembling the actual copies of the edition this week, so there will soon be more copies.

It’s hard to imagine that the smash-and-grab thief has much interest in an archival box filled with oragami-like botanical art. So my fantasy is that it was immediately discarded, and will turn up in twenty years or so when the rest of the copies in the edition are in major museums. There will be much debate about the provenance of the prototype before it is auctioned for megabucks at Sotheby’s.

Returning to earth, if you happen to be wandering in downtown San Francisco and see a box of botanical art in the gutter pick it up! Let me know!

I’m not giving up on San Francisco photography, but will be more careful about where I park in the future. Please consider joining me in the Mission on Saturday February 23—I know it will be a fantastic shoot!