OK. I’m going to give the punch line away. I love my new Nikon D300. I love this camera with a passion that rivals that of my feelings for some film cameras in the days of yore like my Leicas, my Nikon FM2, and my large format Deardorf. This is the first digital Single Lens Reflex (dSLR) that I’ve used that approaches what a dSLR should be, and maybe even the Platonic ideal of a dSLR. This is definitely not the “Chef of the Past” or your father’s camera. The D300 gives a pretty good sense of what digital cameras for serious prosumers are likely to be in the future. If you want, you can buy your Nikon D300 from B&H Photo.

Leaving passion and infatuation out of things for a moment–hard to do, since for us photographers our feelings for our gear always involve strong emotions–the improvements in the D300 compared to the previous model (the D200) are mostly incremental rather than revolutionary. The camera still has some serious drawbacks, or at least presents issues that are somewhere on that ever present feature-bug line. For example, informed and well-intentioned photographers will reach differing conclusions about the sensor, which is smaller than a 35mm frame in a ratio of 1.5 to 1 (more on this issue later). And the D300 form factor is a behemoth. If you don’t have the committment to schlepp a heavy piece of gear around, this isn’t the camera for you (and more power to you).

This is a camera capable of taking images that resolve comparably, in my opinion, at least to medium format film. For example, take a look at this photo of the California coast, shot with the lens wide open: 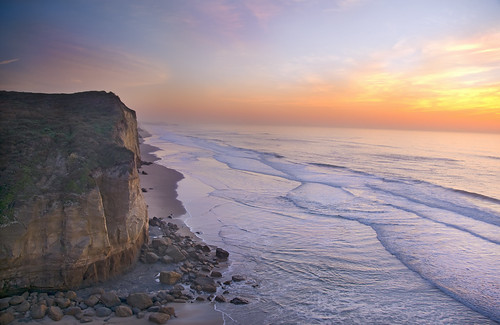 It’s pretty clear to me that with a 14-bit RAW capture like this one (at ISO 100) the limiting factor is becoming the quality of the optics rather than the sensor, capture, and on-board processing mechanism. Note that the 14-bit capture is new (the D200 captured in 12-bits), and adds considerable information and tonal quality in the photos I’ve examined closely so far. A downside to this increased file size is that larger file sizes clog memory cards and disk storage. For me, this is a price well worth paying, but I’d suggest ameloriating the issue by using memory cards that are as fast as possible to speed processing of the larger-size image files. (SanDisk Extreme IV cards are a good choice, and what I’ve standardized on.)

My assumption is that I’m writing this review largely for people who already own Nikon dSLR equipment. I’m studiously neutral in the Canon-Nikon debates. Both brands are good. And both companies operate on the razor blade model: the real cost comes when you buy the lenses, which lock you into a system. So if you already own a Nikon dSLR like the D80 or the D200, the D300 will feel very familiar right out of the box.

Here are some of the incremental improvements that make me happy (besides the ability to do 14-bit RAW captures) with my D300:

I think that the only real carping you could do about the Nikon D300 has to with the sensor size. Like all of Nikon’s DSLR offerings up to now, this sensor is smaller than 35mm in a ratio of 1.5 to 1. This means that lenses bring subjects closer than you’d expect compared to a similarly designated lens on a 35mm camera, although there are anomalies related to how particular lenses play on specific cameras. My 200mm f/4 macro lens produces a very different angle of view than the 200mm setting on the more recent 18-200mm VR zoom lens (go figure!).

In general, having a sensor that is a bit smaller than the 35mm comparison size is good for telephoto lenses (they get more telephoto), but not so good for wide angle lenses (they don’t stay as wide angle).

Since Nikon has just introduced its first full sensor frame model (the D3, which costs several thousand dollars more than the already not inexpensive D300), it’s worth having a further look at this issue.

First, lenses specifically designed for digital cameras may not project full frame onto the sensor. This is a way for extreme wide angle lenses to stay wide angle, as in the photo below of the atrium at San Francisco’s Embarcadero Hyatt taken with a digital fisheye (there’s no very good way to express the 35mm equivalent of this lens): 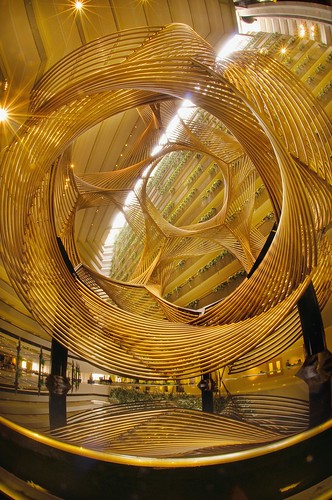 So, whether full-frame D3, or somewhat smaller frame D300, some digital lenses don’t use the entire sensor area in any case. The optical impact of sensor size is a mixed bag, but the impact of sensor size on noise is clear: it’s a “true fact” that the smaller the sensor size the more noise. But noise processing is getting so much better that noise is becoming less of an issue. (For a related story, see Noise as a Historical Artifact.)

To digress for a moment, my Dad, a professional logician, has strenously objected the the phrase “true fact” on the grounds that all facts are by definition true.

Anyhow, I’ve gone a bit far afield. Here’s my last word (for now): At first I thought the D300 was what the D200 ought to have been. That’s true. But now I think that the D300 moves closer to what a dSLR, with the emphasis on digital, ought to be–and shows the likely direction of DSLR cameras of the future.