The Lithographers Club of Chicago is a printing industry trade group. They selected an image of mine to use for the cover of their May/June 2008 magazine issue (the cover is shown below). Printing was contributed by Komori (they are a large manufacturer of printing presses) and demonstrates the Hexachrome process-color system. I’ll explain Hexachrome color later in this story. 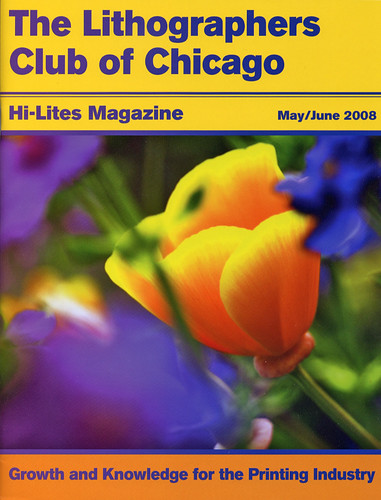 Here’s my photo Wind, taken as a full horizontal, but cropped for this usage to fit the vertical cover format. You can read the story of how I came to make this image originally. 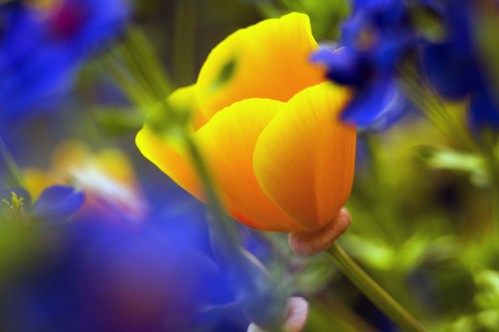 Hexachrome color is a six-color process devised by Pantone in the 1990s. As you likely know, most process color printing is done with four process-color inks. The four process colors are Cyan, Yellow, Magenta, and Black (or CMYK for short).

The two colors that Hexachrome adds to CMYK are Orange and Green, so the six colors in Hexachrome process color are CMYKOG.

What’s the point of this? From the viewpoint of the digital photographer, the range of colors, called the gamut that CMYK can reproduce is limited. If you’ve ever had your photos reproduced via offset, you’ll know that some of them come out OK, but others lose a substantial part of their color range. CMYKOG (Hexachrome) has a much greater gamut than CMYK (see diagram below). In fact, the Hexachrome gamut falls somewhere between the sRGB and Adobe RBG 1998 gamuts, making photos reproduced via Hexachrome look very comparable to what you see on your RGB monitor (and your camera LCD). If you’ve ever flipped the color profile of an image in Photoshop from RGB to CMYK, and watched a huge color shift occur, you’ll know that this is potentially a big plus for digital photographers.

Commercial printers may not care so much about fidelity to an on-monitor RGB version of a photo. But they do have concerns about efficiency. For these printers, an important benefit of the Hexachrome process color system is that most of the solid colors included in the Pantone Matching System can be simulated using Hexachrome color. Simulating PMS colors means you don’t have to stop printing presses to prepare special plates for spot colors that have been specified using the PMS system (a common occurence in applications such as packaging). This translates to a potential boost in efficiency and cost savings. 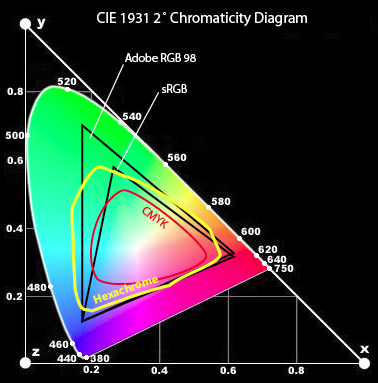 So how does my photo do in CMYKOG? This is an image that has been reproduced a number of times in books. Each time, I’ve had to work on the CMYK files. But this time the reproduction shows the full range of colors in my photo and looks pretty much just like it does on my calibrated monitor—straight from the RGB file, with no special prep work on my part. In other words, I like it.

This entry was posted in Hardware, Photography, Photoshop Techniques.