The Cathedral of Christ the Light was built over the past three years to replace an earthquake-damaged structure. Designed by the famous modernist architectiure firm of Skidmore, Owings and Merrill, it is center of the East Bay diocese, serving some half million Catholic souls. Below the ground, a mausoleum mirrors the footprint of the building with thousands of crypts, niches for cremated remains, and special crypts for all the past Catholic Bishops of Oakland. 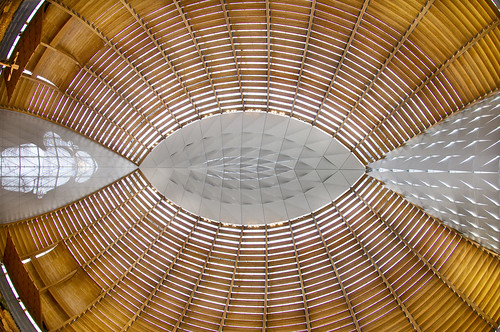 The current, living holder of the Bishopric of Oakland describes the experience of visiting the Cathedral of Light, as it often seems to be called for short, in these words: “To enter the cathedral is to experience the world as God intended it at creation and as he restored it through redemption.” (I get this quote from an acid assessment of the new Oakland Cathedral in Catholic Minority Report, a Catholic blog with the motto “We laugh because we believe.” The story called for suggestions from readers of better names for the church, and the responses include names like “Our Lady of the Upside down Bundt Cake” and “Cathedral of Light Under a Bushel Basket”.)

Visiting the Cathedral of Light in downtown Oakland on the shore of Lake Merrit is definitely a weird experience. Downtown Oakland itself seems to be filled with office structures and condominiums that are three quarters finished but look never to be completed, with hand drawn signs directing passers by to soup kitchens attached to the construction scaffolding.

The church itself is well patrolled by security guards and seems to attract quite a few tourists (but maybe not so many worshippers, at least on a recent Saturday). It’s a very peculiar building. Actually, two buildings: an outer steel and glass tower, resembling nothing so much as a stylized nuclear power plant, and an inner framework of wood comprising an almost completely standalone basket structure within the structure.

The religious iconography is hard to miss: a crown of thorns on top of the exterior (see photo below) and inside baskets, fishes, and Christ (as you can see in the fisheye view of the interior ceiling, above).

This is architecture as public spectacle, and it seemed popular with the people I talked to when I visited. It’s also very vulgar (even leaving aside the strange hundred foot high rear-projection Christ). Architecture that tries to persuade by overwhelming in this way is the architecture of fascism. It’s ironic and suggestive that the phrase Cathedral of Light was used by the Nazis to describe the main visual features of the Nuremberg rallies. 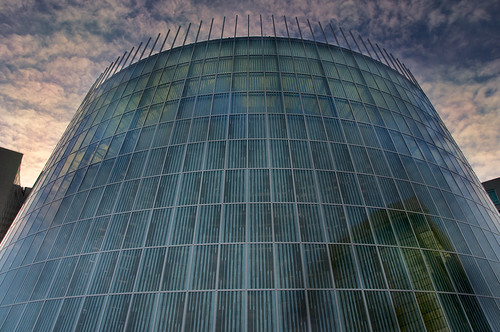 Related stories: The Jesuit parish church of St. Ignatius is in the old ostentatious, pre-modern style of Catholic architecture; this fisheye shot of a dome at Frank Lloyd Wright’s Marin Center is comparable in viewpoint to the dome above, but shows how distinctive the design of public spaces can be.