As a self-employed person with four kids I’ve naturally had trying moments dealing with health insurance bureaucrats in the United States, not to mention figuring out how to pay for coverage. My personal view is that anything other than a single payer medical system is ultimately unworkable, and we are nuts to interpose health insurance companies with a profit motive between ourselves and our medical needs. Tying health insurance coverage to employment is also crazy in my opinion.

So I’m no fan of the American health care system. Before leaving for Cuba, I tried to figure out how health care could be as good as some sources indicated in a third world country with material shortages so bad that soap, toilet paper, and analgesics (such as aspirin) are in short supply. I would love to be able to report that the Cuban health care system is as good as Michael Moore says it is—but it just ain’t so.

My family has two premature kids (Julian and Katie Rose) and we’ve had four high-risk pregnancies. So I was very interested to visit the high-risk pregnancy ward shown in the photo in Trinidad, Cuba. I brought a duffle bag of baby clothes and Tylenol to Cuba. After giving these to the director, I was able to look around and snap a few photos. 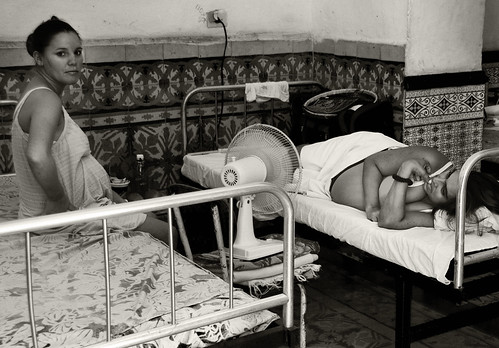 If you look at the photo, you’ll see that things are reasonably clean (not apparently true of all Cuban hospitals). However, there are no medications, no IV drips, no monitoring equipment and not even a thermometer. The ward provides iron bed frames, you bring your own sheets. The only thing on offer is bed rest.

None of my children would have survived in Cuba.

It seems true that Cuban medical schools produce numerous doctors (many of these trained physicians are exported to Venezuela in exchange for oil). It’s free for Cubans to visit a doctor, but there’s a grave shortage of anything one of these doctors might prescribe.

In the Moore film, several 9/11 clean-up workers who were dissatisfied with their medical care were invited to Cuba to be treated “like average Cubans.” In fact, these workers were taken to one of the exhbition wards in a Havana hospital reserved for the elite, or for foreigners with hard currency.

There is some medical tourism to Cuba (particularly from South America) and the clinics available to foreign tourists are clean, with doctors and nurses waiting for tourists to show up. But these are not the facilities the average Cuban sees. Nor are even the most basic medical necessities available in drug stores, making the fancy asthma inhaler purchased cheaply at a Havana drugstore in Sicko quite a miracle indeed.

In a CNN interview, Moore suggests that people should get off his back regarding the Cuban segment in Sicko because the success or failure of the Cuban medical system is not as important to his premise as the success of health care in Canada, France or the United Kingdom. He’s got a point, but Sicko is a film that cost nine million dollars to make and has taken in more than twenty-four million dollars. Moore was snookered or is lying, or both—and it’s just business that he is sticking to his guns and not admitting he erred.

The Cuban government boasts of preventive care, longevity, and low infant mortality rates. It’s hard to place much faith in claims of preventive care in a country in which smoking is rampant, and more-or-less officially condoned. The claims of longevity are essentially unverifiable and based on statistics from a government that is notorious for its propaganda machine. The low infant mortality per live birth rate is probably a skewed statistic, with a built in bias because of the practice of aborting all fetuses with any signs of trouble, and because of the way live births are counted. (My daughter Katie Rose, born at 24 weeks gestational age, probably would not have counted as a live birth in Cuba.)

It’s great that there is universal health care in Cuba, and it is also great that there are so many trained doctors available. It must be incredibly frustrating for these doctors not to be able to provide even the most basic health care needs because of material shortages.

This entry was posted in Cuba.