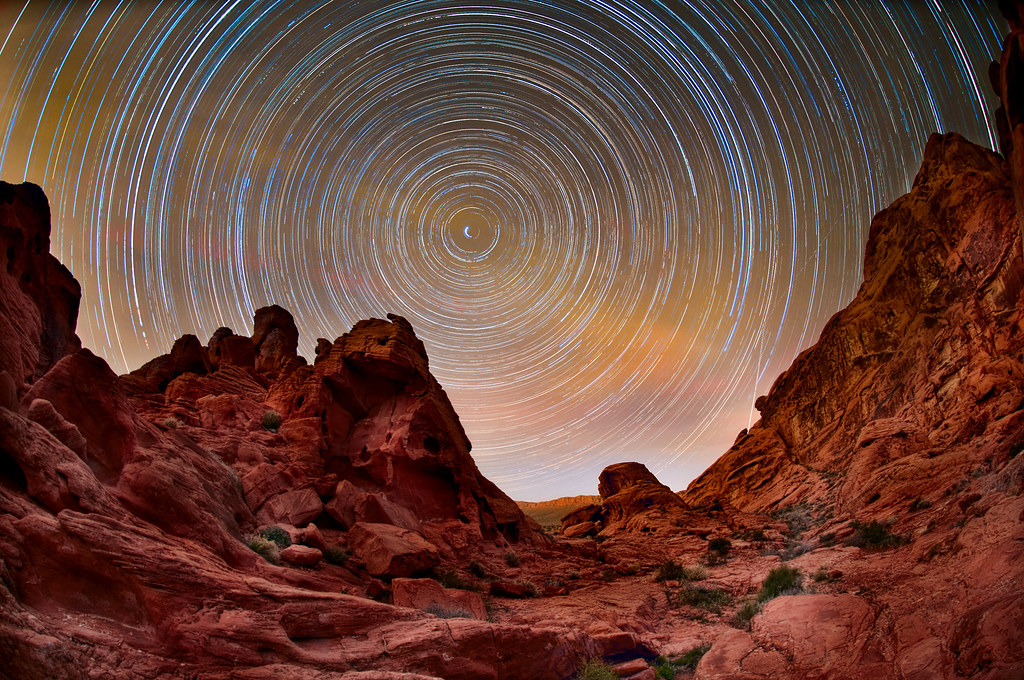 From Death Valley I drove across the suprisingly wild and beautiful uplands of Lake Mead National Recreation Area, and photographed Hoover Dam (more on these locations in a later story). I stopped at Valley of Fire, a Nevada state park.

To make this image, the most important point was to find a north facing location where I wouldn’t be disturbed, and where the ambient light pollution from Las Vegas (some 50 miles away) would be blocked by nearby rock formations. This light pollution was surprisingly intense; indeed, I don’t think one can really find a truly dark night sky within a hundred miles of Las Vegas, even when shooting in the dark of the moon (as I was).

The lights of Las Vegas were one thing. As the night wore on, the cloud cover increased, which also amplified the Las Vegas light, because it bounced off the clouds. I began to be seriously worried that there wasn’t enough contrast between stars and sky to pull this image off.

The final image is a stacked composite of 129 4 minute exposures, roughly 8 hours and 36 minutes total exposure time. I shot each exposure at f/2.8 and ISO 400, with my 10.5mm digital fisheye. For me, this is an exposure that really blasts the photons to the right side of the histogram, verging on overexposure.

If you are interested in learning how to make images like this, please consider joining me for the annual Star Circle Academy workshop and night photography fest in the Alabama Hills area of the eastern Sierras in early November.