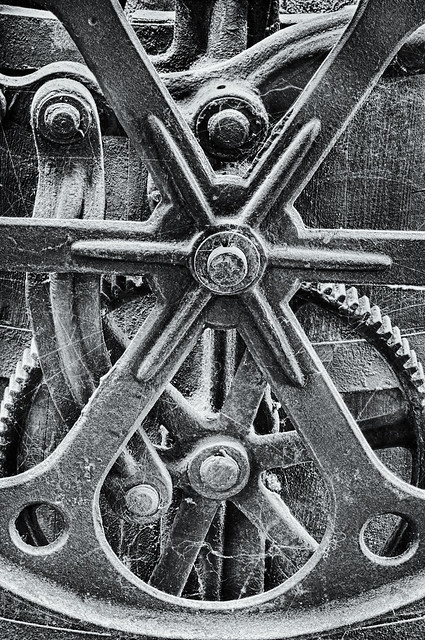 This is a side view of an old industrial clothes washing machine of the type that used to be called a “wringing mangle,” or sometimes simply a “wringer.” I’m thankful for many things in life, and one of them is that we do not use a machine like this in our house. We’ve been averaged three or four full washer loads a day, seven days a week, for years now—and I just can’t imagine what it would have been like in the old days using a wringer, or even by hand.

The wringer was in a small vineyard museum in California’s wine country. Covered with cobwebs, in dim light, it was clearly a subject that called out for HDR: parts of the machine reflected light from an open barn door, but the lower portion of the equipment was in deep shadow.

With my camera on my tripod I got down fairly low to the ground so that I could be parallel to the wringer’s mechanism. Using my 105mm macro lens, I made three exposures, all at f/36 and ISO 100. The shutter speed durations were 8 seconds (the darkest version), 15 seconds, and 30 seconds, with long exposure noise reduction turned on.

In my pre-visualization of this image, the thing that interested me most was the contrast between the soft, white dust and cobwebs, and the hard edges of the old machinery. With this contrast in mind, I knew I wanted to create a monochromatic image.

Back at my computer, I started processing the images by loaded the RAW files into Nik HDR Efex Pro. I created two versions with Nik, one a fine structured color version and the other an HDR monochrome, which I put aside for the time being.

I converted the color version to monochromatic using several Nik Silver Efex presets as well as Photoshop Black & White adjustment layers. I then blended the HDR monochrome created from the RAW files over the top of the monochromatic conversion at about 20% opacity.

This kind of HDR wringer is not always a trivial process, but then neither was washing clothes with a wringing mangle in the good old days.

This entry was posted in Bemusements, Monochrome, Photography, Photoshop Techniques.