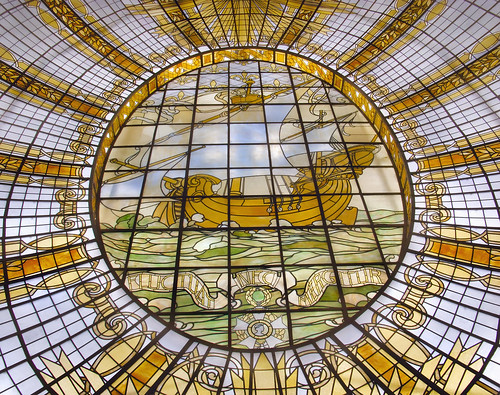 I did a tour of the floor at MacWorld, and then with some time to spend before my panel at the Apple Store, what else to do in downtown San Francisco but take some photos? This one shows the surprising ceiling in the Neiman Marcus store across from Union Square.

I had my “sketch” camera, my Canon G9, with me. I’d really rather have had my full rig with tripod and a wider angle lens for this shot. Then again, I don’t know what the reaction at the store would have been if I’d tried to take complex exposures in the middle of their rotunda. With my little Canon guy I could drop to the floor and take a perfectly reasonable 12 megapixel capture, steady enough at 1/25 of a second (and f/8 for maximum depth-of-field) thanks to the in-camera image stabilization. No one even gave me a glance, although I imagine not giving anyone a glance is part of the Neiman Marcus snob appeal.

The Latin inscription in the stained glass ceiling, Fluctuat nec mergitur, means something like “Wave tossed, but unsunk.” This phrase, the motto of Paris, France, seems apt for the subject of the stained glass, a little odd for a snob department store, and definitely an appropriate way to describe my life at times.