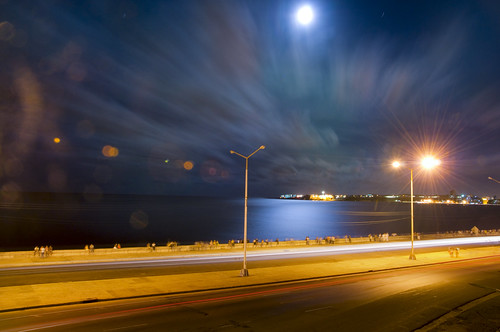 The two minute exposure gave the clouds a chance to spread out and show their colors in the moonlight. This exposure would have blown out the Malecon itself in the foreground of the photo, so I used a layer mask and a gradient to combine in a darker version shot at 20 seconds.

You can see a row of people living their life along the Malecon sea wall. But the long exposure has “flattened” them in some strange visual way—so even the people seem to be merely accessory to the landscape.

This entry was posted in Cuba, Digital Night, Landscape, Photography.