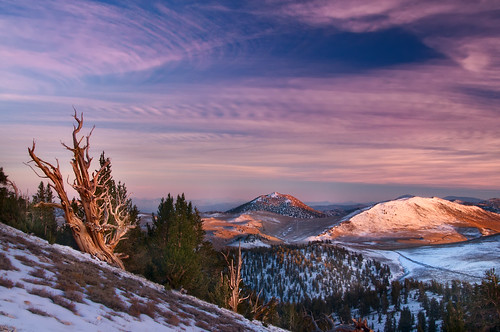 On a break from scouting for our Alabama Hills Star Circle workshop, Steven and I headed up into the White Mountains of eastern California, home of the ancient Bristlecone Pines. Our thought was to get to the Patriarch Grove, which we’d heard was inaccessible due to snow.

Sure enough, about a mile from the Grove the road became impassable. We parked the van, and scrambled up a nearby hillside, hoping to take advantage of the Golden Hour light. My breath came fast as I schlepped my photo gear up the snowy hillside at 11,000 feet.

I found a nice piece of weathered Bristlecone wood low to the ground, and started to go into photo-trance mode. This is a state where I am aware of the subject, my vision for it, and my camera equipment—and nothing much else.

All of sudden, I heard voices. I looked around. Cars had parked down below next to ours, and were disgorging photographers and their tripods.

A distinguished looking man with silver hair in a yellow parka with a compact point-and-shoot in hand came up the hill near to where my tripod and I were set up. He was lecturing to a much younger sidekick.

Yellow Parka Man (to me): “Your shadow is going to be in your composition.”

Harold (a bit disgruntled at being interrupted, and at having to deal with all these other people): “I’ve been doing this long enough to know what is—and isn’t—in my frame, thank you very much.”

I hear Yellow Parka Man mutter under his breath, “I hope so.”

A few minutes went by. Then Yellow Parka Man says, “Quit hogging it here. You’ve been photographing quite long enough.”

I really didn’t know what to make of this, after all, I had been there first, and had only been there ten minutes at most. I said, “Sir, you are being quite rude!”—true enough, but it didn’t quite cover the situation.

I decided I wasn’t going to get any peace in the spot, so after I finished my exposure I started to pack up so I could find a less contested location, which resulted in the shot above. As I started to leave, the sidekick decided to speak to me.

Sidekick (who for some reason won’t tell me the name): “You probably have many of his books at home on your shelf.”

I bit my tongue and didn’t mention my own books. My guess was that Yellow Parka Man was David Muench (guess subsequently confirmed). I think Muench was leading a workshop and thought I was one of his students—which got him annoyed when I ignored his initial advice.

If you visit the Muench website, you’ll see that he is a great photographer of the pre-digital era. I would have prefered to meet him some other way, and I’m sure this kind of exchange is not typical of how he operates.

Tempted by Steven and my workshop (November 5-7, 2010) in the wide country east of the Sierras? We promise to know who is in our workshop, and we won’t tell you that you are taking too long photographing the night! It’s not too late to register.

Some of my shots from previous visits to the Patriarch Grove: Touching the Rainbow; Day of Reckoning.

This entry was posted in Bemusements, Landscape, Photography.