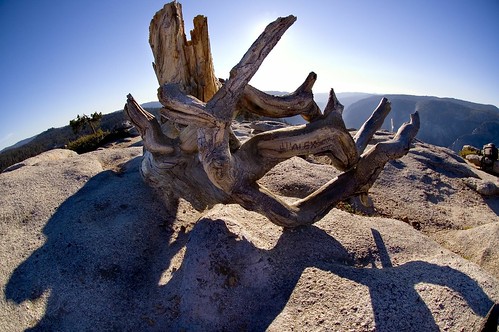 This is a fisheye photograph of the remains of the famous Jeffrey Pine on Sentinel Dome above Yosemite Valley.

The tree was photographed as early as 1867 by Carleton Watkins, and later by Ansel Adams and many others. It died following years of drought in 1976, but was standing until mid 2003.

It’s really sad to me that when I photographed the tree in 2005 on my Death Valley road trip, it had been defaced by graffiti. It’s true that Sentinel Dome is easy to climb and only a one mile hike, but come on! I hope “Alex”, whose name is carved in the dead tree, is deeply ashamed!