From Sunset to Sunrise 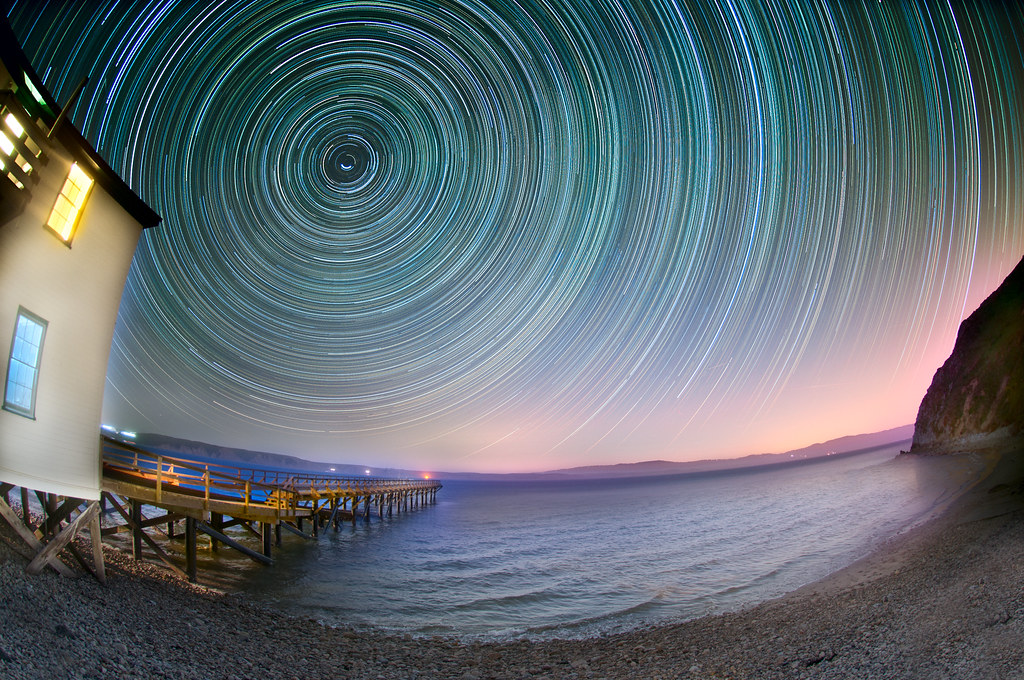 Relative to the earth, the stars wheel in the heavens every night, though we don’t see them that way. If we live in a city we hardly see the stars at all. And if we live somewhere outside the bounds of light pollution—rarer and rarer these days—we see the stars as stationary jewels in the sky. It takes a camera, and a long aggregate exposure, to demonstrate graphically that the cosmos is always in motion.

I made this image while teaching a Macros & Close-Ups workshop at the historic Coastguard lifeboat station on Point Reyes. Perhaps oddly, I am interested in capturing both the extremely large and the very small.

In heavy winds, there wasn’t much choice where to set up. It’s an absolute requirement in this kind of photography that the camera doesn’t move even a hair. I placed my tripod in the shelter of the building.

To make the image, I used a portable lithium battery with an inverter and an AC adapter to power my camera. I used an intervalometer to program the Bulb exposures, and started the sequence of captures going during sunset. In the morning, I turned the rig off as the sun began to rise.

I used my 10.5mm digital fisheye, and combined 139 stacked 4 minutes exposures for a total exposure time of roughly ten hours; each exposure was made at 4 minutes at ISO 400 and f/2.8.

Special thanks to workshop participant Harvey Abernathy, who stayed up with me Friday night shooting stars together, and whose light painting in the boat bay accounts for the apparently blue window you see in this image. (The image in this story comes from a second stack shot on Saturday night, meaning that between the workshop and the stars sleep was in short supply for me!)

Related image: from a previous workshop a star circle image shot from the other side of the building.