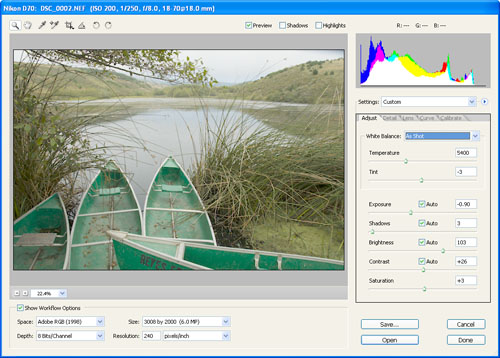 In a previous post I explained the basics of my workflow for processing a digital image in Photoshop. The first step in this process is to open the image in Photoshop, use the Camera RAW adjustment dialog to process the raw image when it is imported, and save the image off as a PSD file (so you can archive the RAW original).

If you haven’t already seen it, take a look at the dialog that opens in Photoshop CS2 when you open a photo saved in Camera RAW format (shown above). It’s a great deal more powerful than the comparable dialog in CS1, and from the viewpoint of digital photographers everywhere this power and flexibility is a Very Good Thing.

Hey – don’t be put off if you haven’t been using your camera’s RAW file format. You should be. For the time being, you can just accept the default / Auto settings in the CS2 dialog, and you’ll get pretty good results — better certainly than shooting in JPEG. It’s fair to say that this window in CS2 is a complex as you need it to be, or as simple. If you are in a hurry, and don’t want to worry too much about tweaking the color balance of your image, as I’ve said, you’ll do pretty well with the Auto and default settings most of the time.

Here are some pointers to help you get started with the wonderful (but complex) RAW Settings files in cs2.

You can open a RAW photo, and get the CS2 RAW Settings dialog to open either from Photoshop itself, or from the Bridge (the new implementation of file browsing in the Photoshop universe).

First, you can save (and open) camera RAW settings. These are the .XMP files you may have seen in the same directories as your RAW images (each one is named the same as a RAW image but with a .Xmp suffix, for example DSC_0001.Nef and DSC_0001.Xmp). These files are written in XML (so you can open them in a text editor and take a look at them) . It’s useful to know about this if you have a number of images from the same batch that you want to treat in the same way.

The title bar of the RAW Settings dialog shows you Exif information for the photo: ISO, lens, and exposure.

Right below the title bar, you have controls that allow you to easily zoom in on an image, crop the image, rotate the image, straighten the image, and take a color sample.

The Workflow Options, at the bottom of the RAW Settinsg dialog, lets you set target color space profile, bit depth, pixel dimension, and resolution. (These settings can also be changed once the image is opened in Photoshop.)

To load a previously saved RAW settings to the current photo, click the triangle to the right of the Settings drop-down list (below the histogram), and choose Load Settings from the context menu (browse for an XMP file). You can also use this context menu to save the current settings.

Now for the fun stuff! Most often, if you want to play with anything other then the default and automatic settings, you’ll want to do this with the sliders on the Adjust tab. I’ll discuss the most important of the settings these sliders control below, as well as giving you an idea of what you can do with the four tabs beneath the Adjust tab.

Generally, you’ll find that either As Shot, or Auto does a pretty good job. But depending on the photo, you may want to tweak white balance a bit.

If you use the Temperature and Tint sliders to tweak the white balance even slightly, the drop-down white balance setting will change to Custom.

If you check the Auto box for each tonal slider, Photoshop will do its best to find the optimal tonal settings for you. Otherwise use the sliders in order from top to bottom to adjust the image as described:

The two other sliders on the Detail tab are used to reduce noise — the random appearance of pixels that degrade image quality and often appear when images are shot at high ISOs that are analagous to film grain.

The Luminance Smoothing slider reduces grayscale noise, which makes an image look grainy, and the Color Noise Reduction slider reduces chroma noise, which usually shows up as random colored pixels. Moving a slider to zero turns off its noise reduction.

Vignetting is a defect that causes the edges of photos — particuarly the corners — to be darker than the center of the image. (A common cause is mounting your lens shade incorrectly.)

Here’s a link to an entry showing the finished photo after opening in Photoshop and processing, and saving (as a JPEG) for the web. The settings I used to open this Camera RAW photo into Photoshop were a custom Kelvin temperature of 6050 degrees, Tint +6, Exposure – 1.1, Shadows 17, Brightness 130, Contrast +25, and Saturation +24.

This entry was posted in Photography, Photoshop Techniques, Writing.