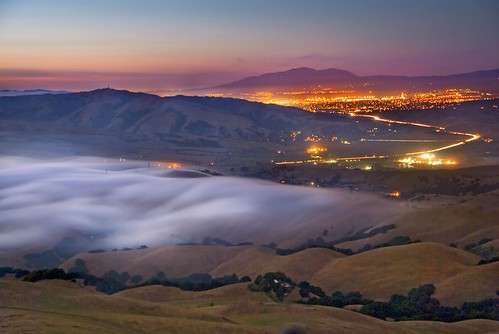 Jack invited me on a hike up Mission Peak, along with his friend Eric. The plan was to meet in the late afternoon for an early supper, then get to the top of Mission Peak in plenty of time for sunset, staying until it was dark so I could photograph the landscape at night.

Mission Peak was a new destination for me. It rises from the East Bay hills, more-or-less to the east of Fremont. The trailhead has an amazing feel to it. There are quandrangle after quandrangle of gated McMansions, and you park right near some of these structures with their faux porticos and feel of conspicuous tastelessness. But right away when you start up the trail there is nothing around you but the empty spaces of the California hills, at this time of year golden brown and ascetic. In the distance the world bustles: if you know where to look you can pick out the Google campus, Palo Alto, and much more. It’s hard to miss the acres of shining new cars for sale in the Automall far below.

It’s roughly a three mile climb up to Mission Peak at about 2500 feet, starting from near sea level. So this is a bit of a trek, and it is possible to imagine unprepared hikers on a hot summer day having a pretty tough time. There’s an actual summit approach up a ridge line, and in a kind of minature way more like a “real” mountain summit than anything else I’ve experienced in the Bay area. (Diablo and Tamalpais are mountain-like, but you can drive up them, and they don’t have Mission’s pronounced summit.)

I imagine I have a good twenty years on Jack, who in any case seems to do triathalons before breakfast. So I tried not to feel patronized when he expressed concern about whether I was in shape for the hike, and later at the summit when he gave me a “Good job” like I do with Julian, my nine-year-old, when he finishes a hike that is tough for him.

Actually, it was totally sweet of Jack to be concerned about me, and I enjoyed getting to know Jack and Eric, and really appreciated their company as sunset turned towards night, and on our descent in the night. So a special vote of thanks to Jack and Eric for introducing me to a wonderful new hike, and for being such great company. (You can read Jack’s blog here, and his Friday Mission Peak Hike story here.)

But going back to the starting moments of this adventure, when I opened the trunk of my car to put on my hiking boots and grab my camera pack, I found I had left my tripod at home. I’d been rushing to get alot of things done before the hike, and then wanted to beat the Friday rush hour down I580 to south bay. As I’d backed out the garage, I’d had this nagging feeling that I’d forgotten something, but, alas, I had dismissed the feeling.

So I wasn’t going to bag the hike, and home was too long a drive to go and get my tripod. You need a way to keep a camera steady to take long exposures at night. What was I going to do?

Part of being a good photographer is being willing to improvise, to look for creative solutions, even when the materials at hand aren’t perfect.

On top of Mission Peak there’s an old, hollow pipe that sticks about a foot out of the ground. I was able to plant my camera in the top of this pipe. Using a bunch of small rocks, I could pretty much get stable time exposures in all directions. Admittedly without the flexibility and precision of my tripod, but still, it worked.

The photo above is a thirty second exposure showing Mount Diablo, Pleasanton, I680, and a fog bank sweeping across the hills. The photo below is a cropped detail showing the upper San Francisco Bay beneath a cloud bank, with “the peninsula” behind.

The summit of Mission Peak is truly a grand view in all directions, and I’ll be posting more photos as I post-process them. I’m sure I’ll also be going back. Up there, you get this weird feeling of aloneness. You are witnessing suburban sprawl and the intense hum of human activity in Silicon Valley. But you are witnessing it as an eagle might, high above it all.

Coming down at about 11PM, the trail seemed endless. We passed a California King Snake on the trail, who seemed more awake and alert than we were.

Then it was back among the McMansions in the cubicle world, and drive drive drive up the endless freeway until I reached home with my family fast asleep.