Yosemite Valley from Half Dome 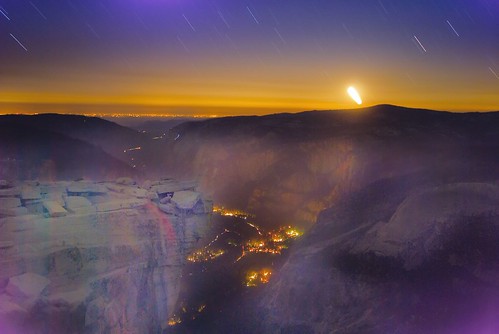 Yosemite Valley from Half Dome, photo by Harold Davis. View this image larger.

This is a 9 1/2 minute exposure taken from the top of Half Dome a little after midnight in mid-June. The camera was pointing west towards Yosemite Valley. You can see the moon setting, along with the time-exposure trails of stars.

It amazes me, as you can see from this photo, that so many lights are on in Yosemite Valley at midnight. I’m also surprised at the ambient light cast by the valley tents and hotels up the rocks walls that line the valley. I also would not have expected to clearly see the night lights of the cities of the California valley, like Merced, from Half Dome.

I’m surprised at the vibrant red of lichen on the rock fin that is part of Half Dome. This color is far brighter by moon-and-star light than in daylight.

As the night deepened and got colder, the air got clearer and the stars like diamonds towards the wilderness in the High Sierra. Back towards civilization (as in this photo) there were more lights. Perhaps it is not surprising that Yosemite Valley is in the direction of civilization.

For more of the story of how and why I made this image, see Moon Shadow of Half Dome, Snakes and Ladders, Half Dome by Starlight, and Midnight Rambles.