Katie Rose in the Garden 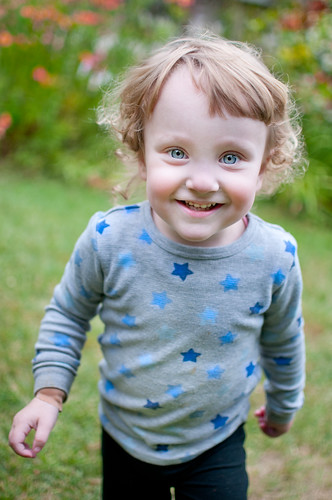 I shot this photo of Katie Rose in the garden the other day with my new 35mm f/1.8 Nikkor lens. This is essentially a very high-quality prosumer lens, and surprisingly inexpensive (about $200 street price) considering its quality.

On a 1.5 sensor, such as the D300 I am using, this prime lens has an effective aperture of 52mm, roughly what we used to think of as a “normal” lens. The prime designation means that the lens does not vary in focal length (compared and contrasted to zoom lenses, which feature variable focal lengths). It does not mean that this lens is a cut of meat, or a number only divisable by itself or one.

To make this casual portrait of my daughter, I got low to the ground. I set the camera to aperture-preferred metering, with the aperture wide-open at f/1.8. I knew the wide-open aperture would let plenty of light in for a fast exposure, which would “stop” the motion of Katie’s jaunt in the garden. The flat depth-of-field would also contrast the in-focus child with the our-of-focus garden.

Then I focused on Katie’s eyes, and waited for precisely the right instant to release the shutter.

This entry was posted in Katie Rose, Kids, Photography.