Where does inspiration come from?

I’m often asked in workshops I lead where I get my inspiration and ideas for photography. I like to respond that “inspiration is not a tame lion.”

This is a reference to the lion Aslan in the famous Narnia series of books by C.S. Lewis. Aslan, we are told repeatedly, is not a tame lion: you never can tell when he’ll appear, and when he’ll disappear again.

My point is that it is possible to chase inspiration too hard. Sometimes the best photographic ideas happen when you are not trying to come up with an idea.

The other day I was looking at a beautiful Japanese maple tree near our house with leaves that had started to change in the autumn. I wasn’t thinking about photography at all—just meditating on the beauty of the tree, the leaves, and our world—a world that is magical and wonderful, sometimes fierce and cruel, and always ephemeral.

All of a sudden I wondered, “How would a branch of this tree look on a black background?”

As I said, I had not been thinking about photography, and this idea seemed to come from nowhere. But once it occurred to me, I had to create the image the idea suggested—and technique was just an implementation detail. 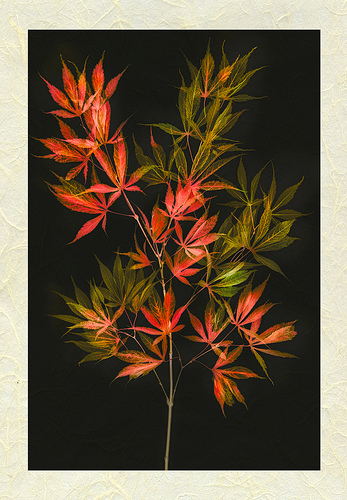 My oldest son Julian once asked me whether—if I had to choose and could only have one—I would prefer to be somewhere, or to photograph it. My answer was that I would choose to “be there.” Of course, this is not a real-world choice since it is hard to photograph a location without also being there. But the point is that the visual appreciation comes before photographic realization.

I like to give myself assignments. An assignment can be along the lines of going out and photographing the first red thing I see, or going someplace special with photography in mind. But these self-assignments need to be taken in the spirit of a knight errant’s quest: the assignment is the quest, and then I take the adventure that is given to me, which might be very different than the idea I started out with. I need to stay open to the possibility of the unexpected adventure and an unforeseen path along the way.

When a path is right, it feels right. Does one choose the path, or does the path choose one? It is a bit of both—the path feels right when it is right—and your intuition will tell you when your choice of path is sound and the path has chosen you.

It is good to learn to listen to one’s intuition. From an artistic viewpoint, intuition trumps logic any time. Intuition can be a very small voice, but if you grant it space it will claim its own volume over time. It is important to me to look at photos, and I do get ideas from looking at what other photographers have done. This can range from browsing Flickr to studying the work of “old masters” such as Ansel Adams and Edward Weston.

I think it is important for landscape and nature photographers not to limit themselves to the work of photographers. I enjoy studying the work of great painters who have worked in these genres, such as Monet, Cezanne, and the German expressionist Emil Nolde, who painted wonderful, delicate watercolors of flowers. My visual interests go well beyond these genres to include the great works of surrealist painters such as Escher and Magritte.

For more about the surrealist influence on my work, check out (among other stories) Impossible Images and Portal.

If you are looking for inspiration, you should seek out the artists that matter to you. Collect a reference library of imagery. Try and understand why you care about these particular images.

I teach my workshops to recognize the many self-imposed reasons we all find to not take photos and block our own creativity. It is important to recognize these blocks so that we can overcome them. A common example is when one is driving along and sees a photo, but one knows one has to be somewhere. I advise stopping anyhow.

For example, the other day I was visiting a Zen Buddhist monastery. I left because I had to be somewhere. On the way out the road I looked back and saw what I thought might be an interesting composition of a fork in the road. One road was well used, and the other less travelled.

Since I had an appointment I almost drove on. But I made myself pull over and park the car, and shot the image shown below that I call Road Less Travelled (follow the link for more of the backstory behind this image). It would have been easy to drive on without stopping, but I find that taking the time to stop and to really look around me is what leads to my best images. Photographers should remember that the world has three dimensions and can be seen in 360 degrees. In other words, don’t just look straight ahead. Look up, down, from side-to-side and behind you as well as in front.

Sometimes I like to play with an image and add an element, or take one way, even after I thought I was done. Does it look better in color, or in black & white? This line of thought explains how the color version of Road Less Travelled became the monochromatic Choosing the Path. Both versions are pleasing, and each has something the other does not. Not being complacent let me be open to the possibility of continuing work after I had thought I was done.

Whether in photography or post-production, keep experimenting! It’s important to make mistakes, and then move on. Any photographer who doesn’t make mistakes hasn’t tried hard enough. You should be reaching for the stars—and forgiving yourself and accepting of those times that you miss your celestial goal. Move on, and use what you have learned as “scouting” information for future creative voyages of discovery.