A reader of my Photoblog 2.0 writes: “I notice that in more than one of your photos you use high f-stop values. Your results look great, despite what I’ve read about diffraction problems occurring at such small apertures.”

The reader is perfactly correct on both counts. I do often use small apertures in my macro photos. For example, the photo of the iris shown below was taken with my 200mm f/4 macro lens (300mm in 35mm equivalent terms) at the smallest possible aperture, f/40. It is also in fact the case that most telephoto lens (and the lens I used for the iris photo is a macro telephoto) exhibit the most optical sharpness within the range of 1-3 f-stops from the maximum aperture (in the case of the 200mm f/4 that would imply the range between f/5.6 and f/11).

Why this discrepancy between the best the lens can offer optically and my choice of aperture? 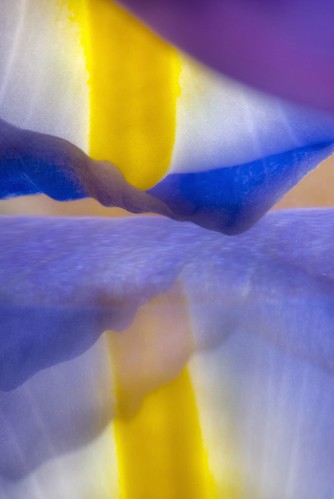 Before answering the question, first a word about optical sharpness. Optical sharpness is an abstract (rather than practical) concept. In the real world, sharpness varies from lens sample to lens sample. There’s certainly no guarantee that your particular lens will deliver the same optical results as the lens tested by the manufacturer (or by a third party). In case you are interested, this page has links to good resources that explain lens testing, and shows you how to test your own lenses.

The only real way to get a good handle on the characteristics of your particular lens is to use it again and again, and check the results carefully at a high magnification.

In any case, the optical sharpness of a lens is only one of the factors that determines total sharpness (you also need to consider the qualities of the sensor that will be recording the image, and software that is applied to sharpen the image).

Now we get to the meat of the matter. Photographic technique is far and away more important to the ultimate apparent sharpness of a photo than optical sharpness (or the other hardware and software considerations I’ve mentioned). Of course, you could contradict me by taking things to the limit: a plastic lens coated with vaseline will never produce an apparently sharp image. But given a halfway reasonable lens, the incremental difference in sharpness between the sharpest and least sharp apertures is close to irrelevant.

To give you an example, intentionally creating intermittent sharpness (some parts of a photo are sharp and some are not) makes the sharp parts of the photo look sharper than they would if the photo were at one overall level of sharpness.

With both telephoto images and macro images, and doubly so with macro telephoto shots like the iris, depth-of-field (the range from front to back of in-focus elements) is shallow. My most important concern in this photo is to maximize depth-of-field, to get as much of the image as possible in focus: hence my choice of a small aperture.

Here’s an excellent article about sharpness from a practical viewpoint.