Sensor Size and Depth of Field

Both Dahlia photos in the depth of field demonstration were taken with my Nikon D200. It may seem odd, but the macro photo below, taken with an old Canon Powershot G3 at f/8, shows about as high depth of field than the D200 photo of the Dahlia taken with a macro lens at f/32. What gives? 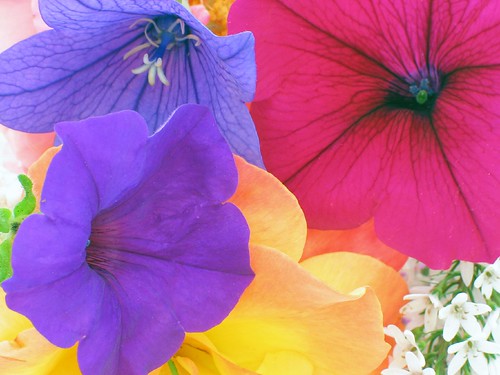 Sensors are classified by their crop factor, which compares the sensor with a frame of 35mm film. My D200 (and all the Nikon dSLRs) have a sensor crop factor of 1.5, meaning that comparing width-to-width, the D200 sensor is smaller in a ratio of 1/1.5 compared to a 35mm frame. The Canon G3 used to take the photo above, like all fixed lens digital cameras, has a much smaller sensor, about 4.5 crop factor, meaning that the ratio to the 35mm film is 1/4.5, and the G3 sensor is about 1/3 the size of the Nikon sensor. (Worth noting: Canon dSLRs, as opposed to the fixed-lens Canon used here, have comparatively large sensors, many of them actually 1:1 with 35mm.)

Advantages and disadvantages? More depth of field at moderate apertures on the small sensor fixed-lens digital cameras means that you can take images with everything in focus (particularly in macro mode) without having to go to excruciatingly long exposures. (However, note that many of these cameras will only allow you to use macro mode at the maximum telephoto end of their zoom ranges.) Photos of general subjects taken with a camera that has a small sensor will exhibit high depth of field, often a good thing. However, even at the biggest aperture settings you still have plenty of depth of field with small sensor cameras. This means that it’s hard to take photos that isolate subjects, like flowers against a blurred background, or portraits where the background is out of focus.