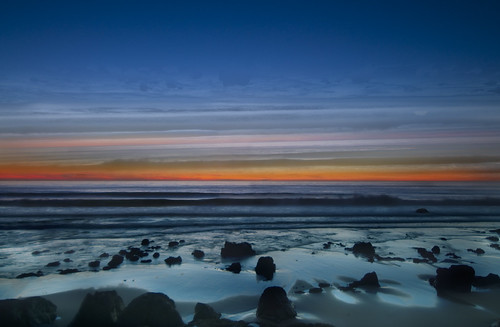 The light fades on my bluff above the crashing ocean. The vista becomes a combination of islands of clarity in the sea spray and the obscurity of coastal fog. What was obvious becomes mysterious. The great rollers become hard blue lines across the sea. The sun is fading fast. This is the path to magic. This is the orange horizon.

Taken during my vigil waiting for the Pigeon Point light. 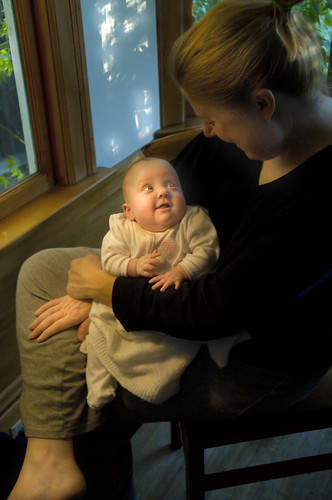 This photo shows Phyllis holding Katie Rose in our breakfast nook. As Phyllis says, it is pure happiness to see Katie Rose so happy, and so altogether present. Yesterday she weighed in at twelve pounds and change, a very far cry from her beginning. Her health and happiness is more happiness than we could have expected back when she was born. 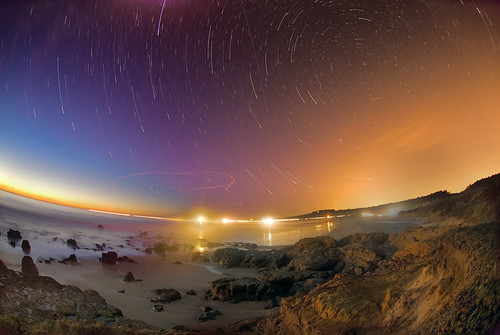 Ever year on a Saturday in November, they turn on the bright light behind the fresnel lens on the old Pigeon Point Lighthouse. The San Mateo coast is beautiful anyhow, and on a summer-like Saturday the scene turns into a circus with literally hundreds of photographers, police lines, and crowds.

If you know me, you’ll know that I don’t much like crowds. I certainly don’t find them conducive to serene photography. When confronted with a group of shooting photographers, I generally look for an alternative solution. I’m not shy, I just don’t like to work around loads of people.

At Pigeon Point, I drove south past the lighthouse, found a place to park, and hiked out to a rise across the small bay. With a great view across the bay at the lighthouse, I was the only one there in a wild and romantic spot above the pounding surf.

I didn’t have much time for star trail image creation: the light went on at 6PM, which was just about the tail end of sunset. By 7:15 or so the moon would be up.

This one is fourteen separate exposures combined in Photoshop for a total exposure time of about an hour. I used my digital fisheye lens to maximize the curvature of the star trails, and made sure to include Polaris in the composition. The erratic red line above the lighthouse is a small airplane that decided to join the fun. 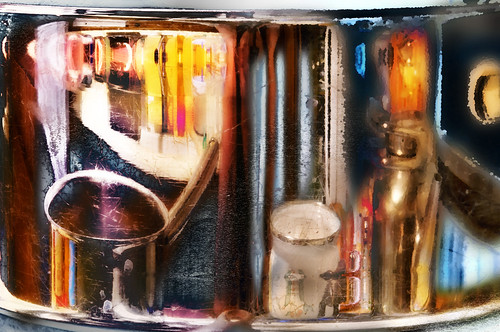 Starting from an already fairly experimental image, like the view of reflections on the stove top that is the basis for this pair of abstracts, it’s fun to experiment with the shapes, forms, and colors to see what one can come up with. 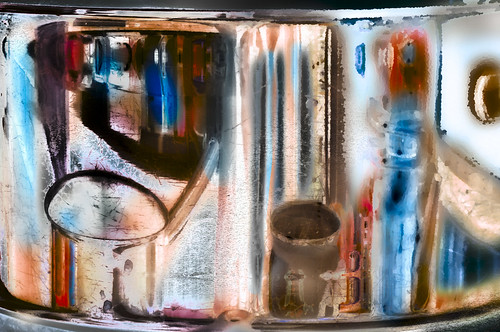 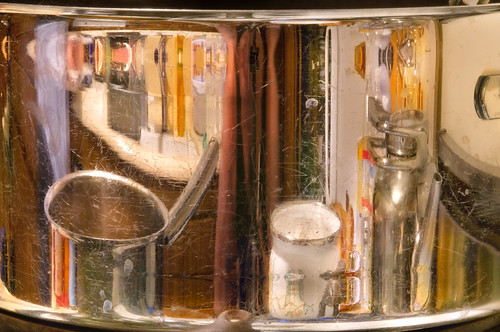 There’s a bit of magic in any kitchen. Food is life. Looking in the reflections on this stove top I am transported to the peculiar working world of food magic—one that is different but not pristine. You can see the scratches and patina from use. But beyond the surface the world bends in curvature. If you look carefully, you can even see my tripod in the mirror world.

Time in this society, and on the Internet, is biased to the now. But who is to say that a photo I took a while back isn’t every bit as good as what I did yesterday? So, from time to time I repost from my archives. This is a reposting of images and a story originally published in June 2006. 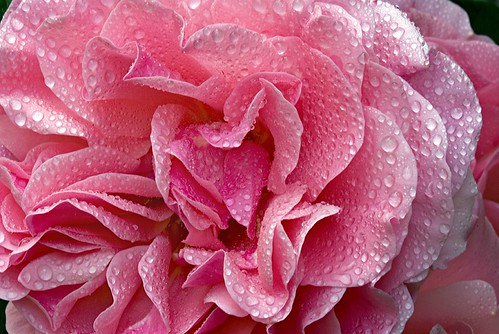 Here are two roses with water drops from my garden for your viewing pleasure. The rose on top is a Dreamweaver from Jackson & Perkins. The one below is an Angel Face—always especially romantic to me because it was the flower that Phyllis and I featured at our wedding. 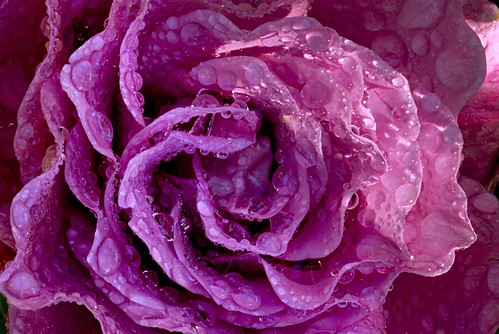 Amy wrote, “I was impressed with your photos and one of your flowers in particular helped inspire a design for my tattoo.” She sent me a link to a photo of her tattoo by Erik Grieve at Tribe Tattoo studios in Edinburgh, Scotland.

I’ve seen my images used for many things. But this is the first time (to my knowledge) that one of my photos has inspired a tattoo.

Here’s more of the story of Amy’s tattoo: “I got it the day I graduated college. I was studying English in Scotland through a program with my college. I took my classes abroad for my very last college courses, so I actually finished college abroad. After the last test, I headed to the tat shop. For me the cherry blossom represents seizing the day, because they only bloom once a year. I also love the water drops on it (like on your pictures) because it reminds me that there are good times and bad times, too.”

In life, as in photography, carpe diem. Amen.

Check out my series of cherry blossom images that inspired the tattoo; you can read about the images in Cherry Blossom Special. 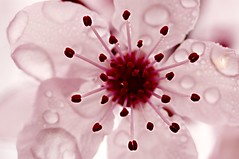 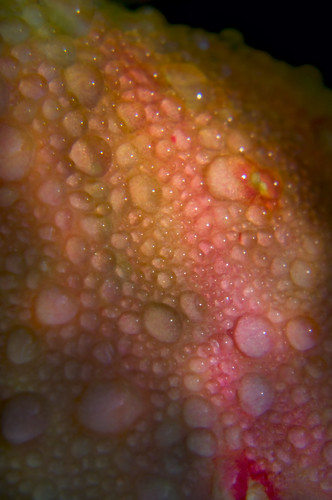 Close up, the water drops gathered on the petal of the Rio Samba Rose remind me of a city, or civilization, all huddled together on the side of a flower cliff. 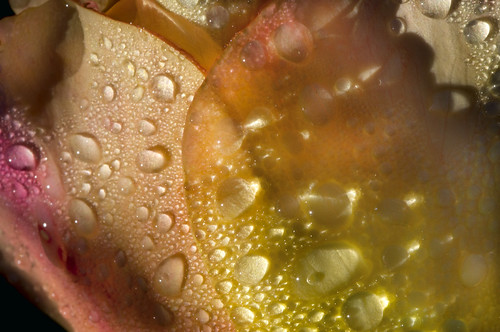 It rained over night. In the first light of the morning sun, I photographed the translucent petals of this Rose (Rosa ‘Rio Samba’), lush and drooping from the weight of the water.

As I’ve noted, being digital means you never have to be done. When I originally post-processed the images in this story, I was a little drunk with the power of mult-RAW processing and cross-channel LAB operations. The original scenes were glorious. But I may have over done the post-processing a bit. You be the judge. 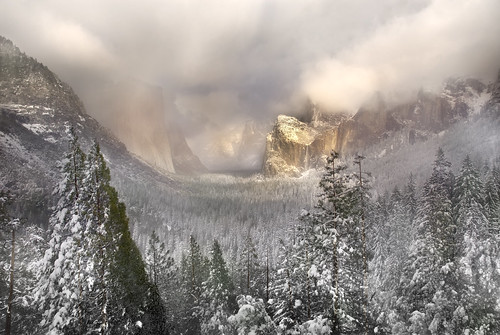 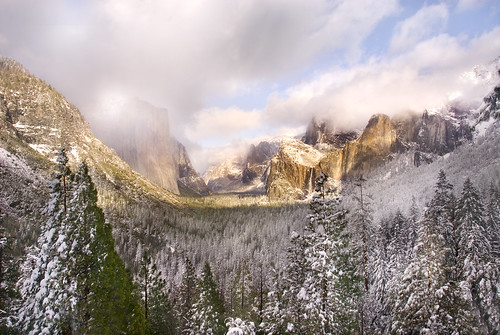 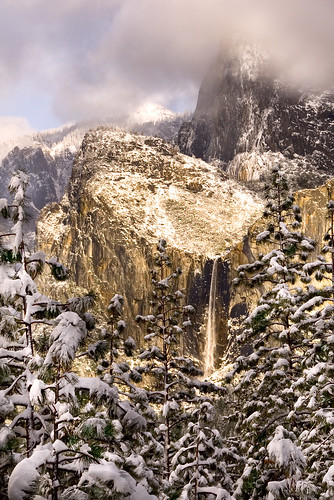 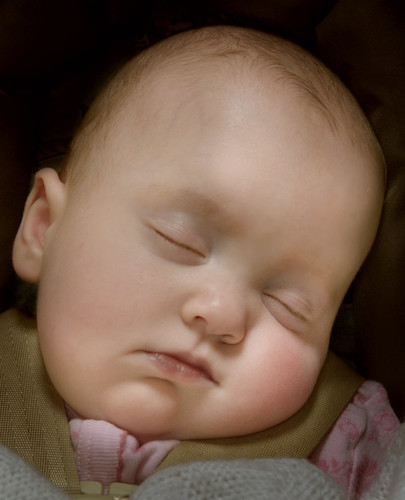 Obviously I am prejudiced. I think Katie Rose has the perfect baby face.

In the United States, 60% of infants get RSV each year. For most of them, this is no big deal, and manifests itself as a mild respiratory cold. But for a 24-week preemie with damaged lungs like Katie Rose, RSV could be a very serious matter. So three cheers for the new technology that came up with Synagis (it wasn’t around when Julian was born eleven years ago, so we had to quarantine him that first winter). Yes we can!

The dosage of Synagis is a precise matter, so they had to weigh Katie Rose before the double shot (one in each thigh). At almost twelve pounds, she’s six times her birth weight. 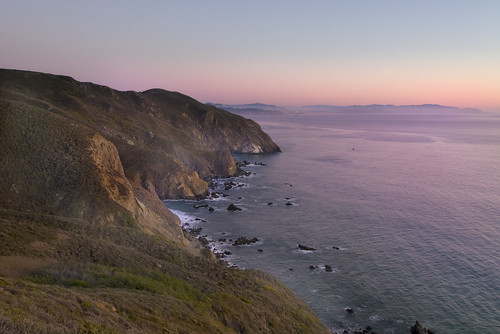 Julian had the afternoon off from school, so we took advantage of the beautiful weather and hiked to Pirate’s Cove, the notch in the rugged Marin Headlands coast about half way up the left side of this photo. On the walk back to Muir Beach, we stopped to snap this photo of the last light of an autumn sunset. 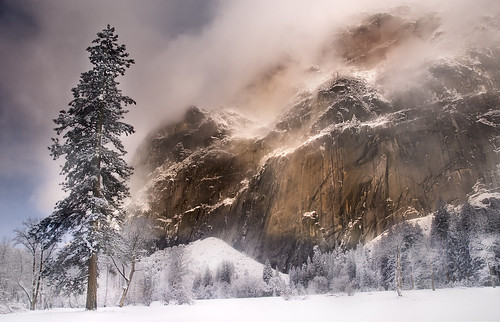 Winter morning in Yosemite dawned cold with flakes of snow and remnant fog, but the promise of a possible clear day with blue skies.

Provided you carefully archive your files, digital means never having to say you’re done. This is a re-processed version of Golden Wonder with the saturation taken down a bit.

Indomitable. Like the mountains in the winter. Like the digital photographer, always striving to perfect his cache of digital originals. 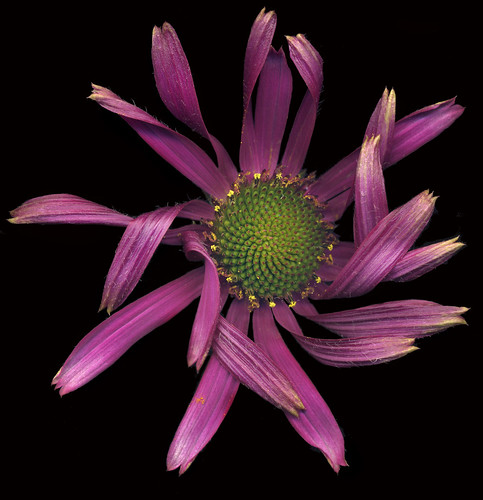 Briefly noted: Like Gaillardia Gone to Seed, this is a flatbed scan, using a black velvet cloth taped into position as the background. For this kind of image, the resolution I can obtain from a decent flatbed scanner is fantastic compared to the best my camera can do—but, of course, there is very little depth and no control of depth-of-field.

Half Dome by Moonlight 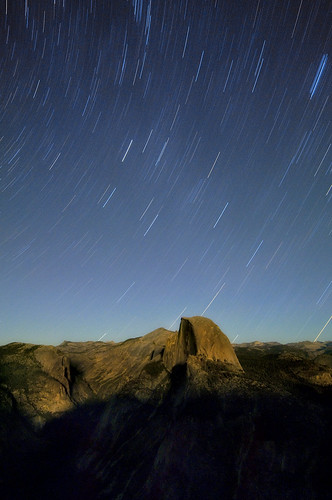 Half Dome by Moonlight, photo by Harold Davis. View this image larger.

This is a roughly twenty minute exposure during most of which Half Dome was lit by light from the setting moon. I took the photo from Glacier Point, and the foreground landscape beneath Half Dome is deep in moon shadow.

Later, after the moon set, the light grew more uniform and the exposures longer, as in the thirty-minute duration When Stars Rush In.