Here are some (more) x-rays and fusion x-rays of flowers. Fusion x-rays use post-production to combine “straight” x-rays with light box images of the same composition. For background information on how these images were made, see Revealing the Unseen with X-Ray Photography of Flowers. By way of comparison, here’s a link to one of my digital photos of a Gloriosa lily, photographed on a mirror, with a little background about the flower. These two versions of a bouquet of Lisianthus (above and below) are both fusion imagery, with x-rays and conventional light box photography. I am pleased that the Dahlia composition (below) does a good job of showing the secrets within the flower, while also capturing the exterior of the flower! The sunflower was the first fusion x-ray I processed. I like it also as a straight x-ray (below). 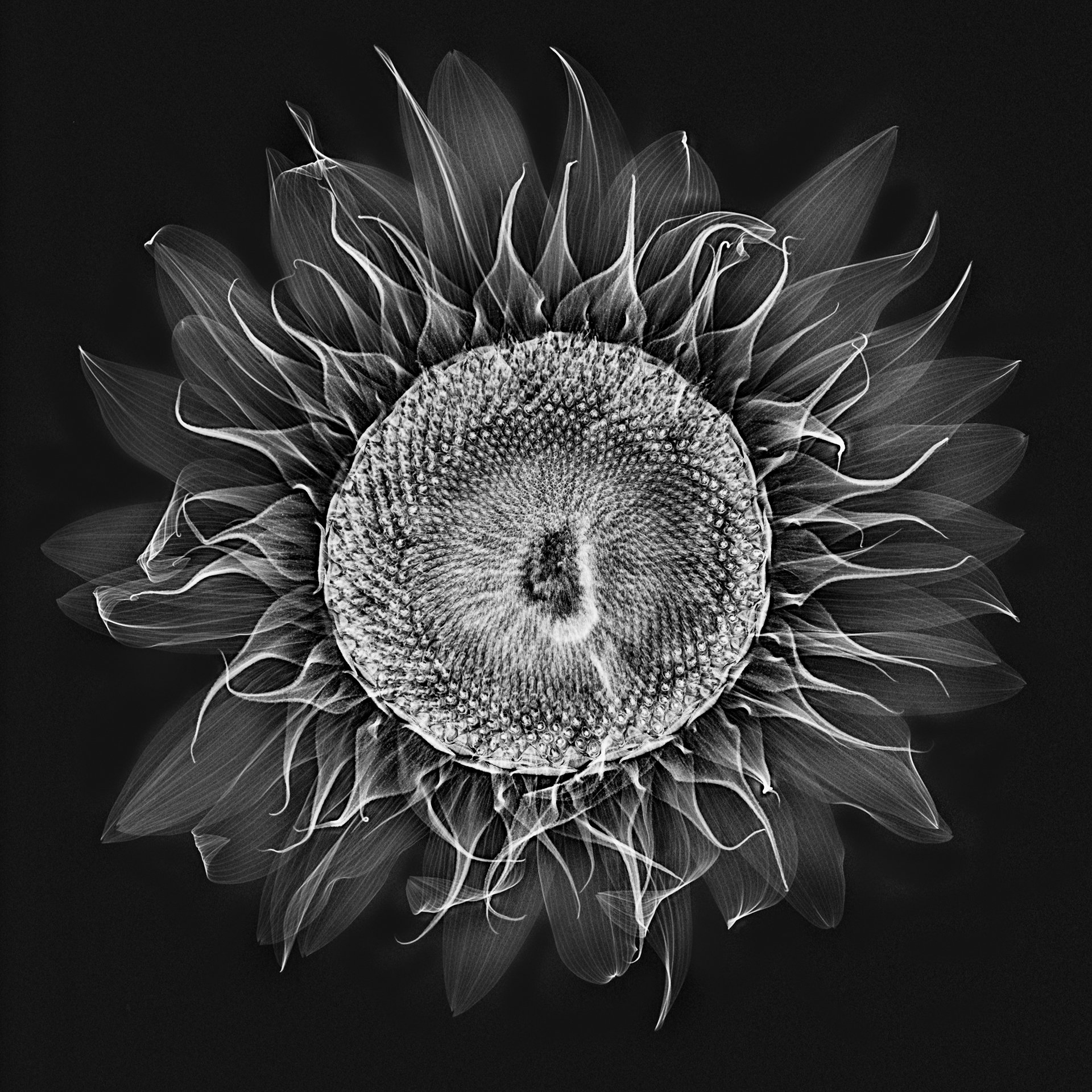 Revealing the Unseen with X-Ray Photography of Flowers

I had to quickly change my plans due to a family emergency and fly home from Berlin. Now that I’m at home, it’s good that things have settled down again, and that I have a chance to review some of the x-ray work I did in Heidelberg in collaboration with Dr. Julian Köpke (you can see some of his x-ray images here).

The examples so far on my blog are Campanulas X-Rays, Dahlia Fusion X-Rays and Light Box Photos, More Fusion X-Rays, and Sunflower X-Ray Fusion. Some comments on the process of making these images, what is involved technically, and where we go from here follow the image below (the on-black version of the Campanulas shown here is a good example of a fairly straight x-ray file without additional coloration or fusion with a light box image). As you likely know, what we see are wavelengths emitted or reflected along the electromagnetic spectrum. Visible light ranges from 400nm to 750nm in terms of wavelength. In comparison, Julian tells me that the x-rays we used had a wave length of roughly 0.04nm (or shorter in wavelength by a factor of about 10,000 than visible light).

Off-the-shelf digital cameras capture roughly the same electromagnetic spectrum as what we see, although it is possible to modify the spectrum that a camera can capture; for example, for Infrared (IR) photography. In addition, even unmodified digital cameras do “see” more of certain frequencies than the human eye, for example, in night photography.
X-rays are a form of electromagnetic radiation not visible to our eyes with a shorter wave length than the visible spectrum. First named and discovered by Wilhelm Conrad Röntgen in 1895 (for which Röntgen won the Nobel prize), X-radiation is primarily used today for medical imaging (also for research and industrial purposes). Looked at from one viewpoint, X-radiation is just another form of photography using a digital sensor to capture the data generated by exposure to the radiation from an electromagnetic wave. As with any kind of photography (or, indeed, any human endeavor), one of the key ways to get better is to practice a great deal (after all, practicing is how musicians get to Carnegie Hall).

Julian and I had three sessions of x-ray photography of flowers, and by the third session we were beginning to get the hang of the thing.

Our initial idea was to blend x-ray captures of flowers with light box flowers for transparency images. This “fusion” would allow us to show the inside and the outside of the flower composition. We used a clear and rigid plexiglass sheet to align the flowers for both processes. The medical x-ray process involves both generating the x-radiation, and capturing it on a digital sensor. In this sense, it is analogous to firing a studio strobe and capturing the light waves emitted on a standard camera sensor. With the stationary medical x-ray device, I was reminded most of an old-fashioned analog darkroom enlarger, where the light beam from the enlarger is captured on media directly below it (photographic paper that is sensitive to light in the analog darkroom process).

We used an x-ray machine designed for mammography for these images.

What turns out is that x-radiation has very different properties as the electromagnetic source than the visible spectrum. X-rays both scatter and decay, in a way that the visible light we are used to does not. So to get good x-ray compositions, it was necessary to work with the characteristics of how the x-radiation emitted from the mammogram system would be captured by the digital sensor, and to arrange the flower compositions accordingly.

To put this comprehensibly, the mammogram system was designed to best capture the shape of the human female breast. We got better results to the extent that our composition could mimic this three-dimensional shape and positioning.

After arranging the flowers on the plexiglass, and aligning the plexiglass with marks we had set up on the machine, Julian and I would huddle behind the operator’s leaded glass shield as Julian operated the machine.

The straight x-ray photos of flowers are really beautiful, and I am grateful to have had the chance to experiment with this. I am also very excited about the fusion imagery, which I have never seen before. I look forward to exploring this area further, and to more collaboration with Julian. I write this from the train from Frankfurt to Berlin, where Julian K. and I are sitting in a first class car at the all-important table, with the all-important wi-fi connectivity. Since I am connected to the world of the Internet, I can post this! We are working on processing images from yesterday’s fusion light box and x-ray photography of flowers. These campanulas as arranged took up almost all the space yielded by the size of the sensor of the x-ray machine. I’ve begun to get a bit of a feeling for how the x-ray sensor processes the electromagnetic waves it receives from the emitter, and how to best arrange the subject in the cone shape that is best for this kind of capture.

Query: Is capture via x-ray photography, or should another term be used? I think “photography” does fit the bill (there is another, more technical vocabulary related to radiology as well). What do you think? This Dahlia was photographed on a light box for transparency, then captured via x-ray photography. The two capture techniques were combined in Photoshop. In the upper version, there is also an L-channel inversion in LAB color.

I worked with my friend Julian Kopke, who is a medical doctor, radiologist, and a physicist to create these images.

This technique is also shown here, and with a Sunflower.

I am honored to be included as one of the top fifteen photography blogs in the English language worldwide. This is good company to be in. Thanks for the award!

Moving on, here are two more fusion light box (Flowers for Transparency) and x-ray images, one of Cala Lilies and the other of Alstroemerias. It has been really fun working with Julian to create these images, and I look forward to using conventional cameras and medical x-ray imaging gear to make and process more imagery. This is a fusion of an x-ray and a light box high-key HDR sequence, using a medical x-ray machine and photographed on a light box. My friend Dr Julian Koepke and I collaborated on making some of these images, and we will get to play with flowers, X-rays, and light boxes again tomorrow! Not so much in common. Maybe photography? Now onward, and across “The Pond.” From high above Times Square, New York does indeed seem to be the “city that never sleeps.” A pulsing light show of humanity whatever hour of the day or night, reflected in the world of glass and girders.

My class and I found this wonderful Buddha in the extraordinary Abby Aldrich Rockefeller Garden in Seal Harbor, Maine.

This was an in-class light box demo, using flowers that my wonderful workshop participants scavenged from the grounds of Maine Media Workshops. So far, this is a wonderful Garden Photography workshop despite the rather overpowering heat and humidity (a bit unexpected on the coast of Maine, even in August). There are fourteen participants, a very full house for this kind of workshop, but everyone is quite nice, and we don’t get in each other’s way.

I have been doing classroom sessions, and we also have a full slate of field locations. These three are from the rather-wonderful-for-a-public-botanical-garden Coastal Maine Botanical Gardens. My main thing in Maine is to photograph flowers and gardens—after all, that is the course I am teaching.

But while here, certainly I am having some lobster. While I am using the present progressive, this is surely a case where it is better to have than to be had!

Once upon a Tintype Once upon a Tintype © Harold Davis

My uncle, at least I think he was my uncle, came back from far away places, India and beyond. He was footsore, and he wanted to rest for days, indeed weeks and months to recuperate. He brought with him iron-bound chests of rough-hewn wood. His caution to me not to open his luggage of course ignited my curiosity. One day when he went out on an errand to his man of business I rummaged through my uncle’s things. Amid old clothes and toiletries of the male persuasion, and statuary of unknown ancient deities, I found this hand-colored tintype, apparently ancient, but maybe more modern than I knew, wrapped in a tattered maroon cloth.

The model is A Nude Muse. She is also seen in the White Daemon Series.The technique is a single in-camera multiple exposure, overlaid in post-production with Daguerreotype and Tintype textures from Flypaper. For related images, see my Multiple Exposures series.