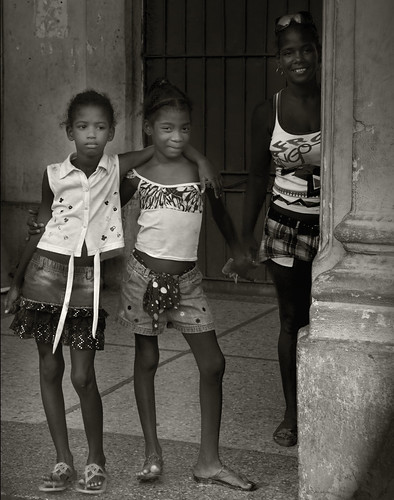 Across the street from the Cuban capitolio nacional under a dark and crumbling arcade a mother and two daughters watched me. She asked me if I wanted to take their photo. I wasn’t very interested, but snapped a few frames to be polite. Then I offered her a little money.

The scam was well organized. The mother marched me into a nearby store, they produced one bag of powdered milk for each of the girls, I paid ten times the market cost of the milk, and girls and mother (if indeed she was their mom) swiftly disappeared with the milk. All this took place a breakneck speed before I could stop to think.

This occurred on my first day in Havana. I was hot, tired and disoriented. I probably would not have fallen for the ploy later in my trip. I also might have remembered that Cuban children seven and under are entitled to subsidized milk as part of their rations, and that inexpensive powdered milk is widely available for older kids.

It’s hard for me to turn down anything that involves kids—which is probably why I didn’t just say no. But I also think the story of this milk scam is interesting in terms of the social corruption it implies.

I’d suppose the store split the proceeds with the mom, with the store getting the lion’s share. But this occured in a store right across from the capitolio. There’s a pretty big police presence, and it is hard to imagine they don’t know what is going on. So there’s a chain of graft and corruption that goes up from my milk scam towards the top of Cuban society. Every Cuban has some kind of racket going on the side, because their salaries from the government in combination with rations are simply not enough to survive on.

I’d like to believe in the best ideals of socialismo, but this kind of thing makes it hard indeed. Very, very sad.

This entry was posted in Cuba, Monochrome, Photography.