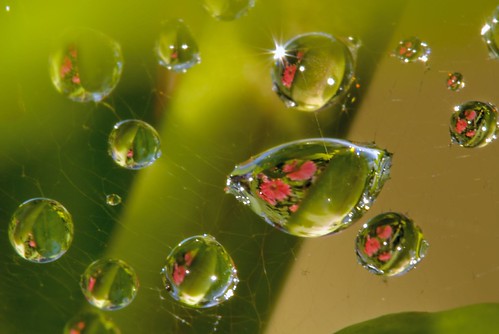 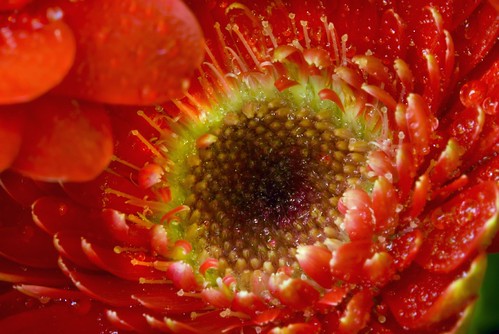 I never get tired of looking at flowers so I couldn’t resist photographing this minature red gerbera daisy. It’s potted, near the front of our house, and the other day lit by dappled sunshine .

Boys in a Tree 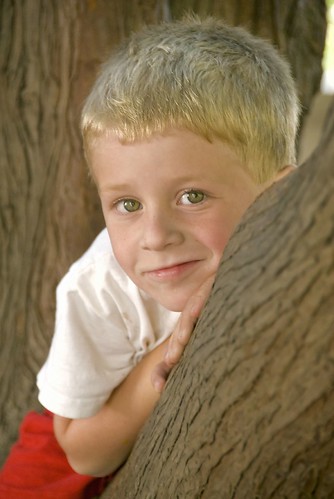 On Saturday we went exploring and found this tree. The kids had fun. Nicky is above, Mathew immediately below, and Julian is far below. After a while, I took their portraits.

As I watched the kids play, I mused that parenting alternates between terror (as Joseph Conrad’s Kurtz might have exclaimed in Heart of Darkness, “The horror! The horror!”) and magnificent wonder. 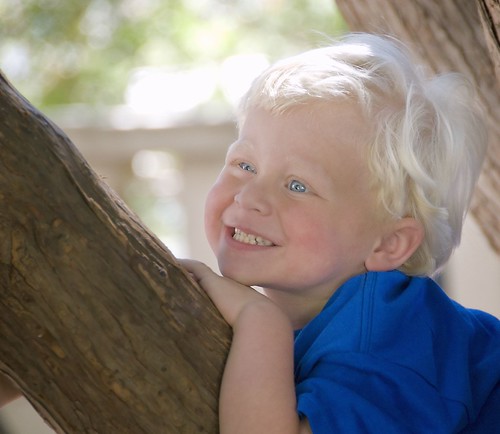 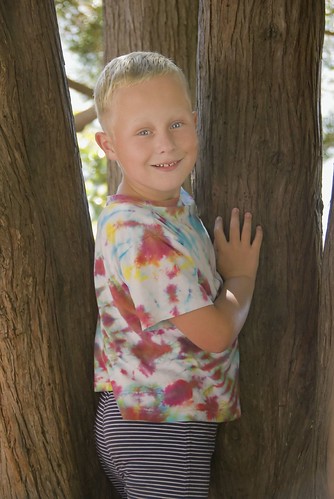 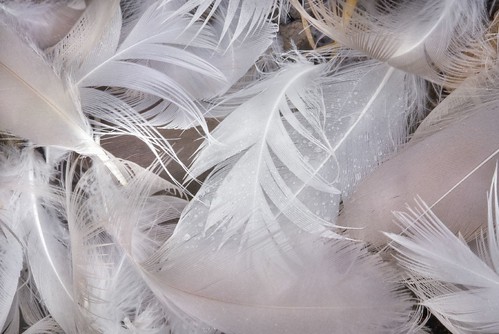 It was overcast and damp today. Rachel was taking care of the kids, and Phyllis and I had some precious time alone. We decided to do stuff, go for a hike in the wind and weather, rather than sticking ourselves inside a movie.

We hiked down to Black Sands Beach on the north, and outer, side of the Golden Gate channel. It was wet and blowing. At the bottom of the stairs onto the beach, a natural wind trap had formed. These seagull feathers were gathered in the trap. I photographed them low to the ground in bright, overcast, and moist conditions.

We were the only people on the beach for a while, and after I finished photographing the feather we walked it end-to-end. Then we headed back to the car, drove into San Francisco, and saw the Martin Munkacsi exhibition at SFMOMA.

Related stories: Blue Feather, Rose Moon Rising (the time before this we had a sitter).

How do you work with landscapes that show an extravagant dynamic range? I was down by the Bay photographing sunset. It was clear to me that the scene had great dynamic range, from the blown-out highlights in the clouds to the deep shadows in the rocks along the shoreline. My normal approach to this situation is a kind of ad-hoc HDR (High Dynamic Range) processing, although whether it really is HDR is a matter of definition. I’ll explain what I mean in a moment.

This time, I decided to take a set of different exposures and see how well the Photoshop CS3 HDR automation worked to automatically combine the exposures (hopefully exposing correctly for both the shadows on the right, the dark ocean, and the bright sky).

To set the HDR merge up, the camera was of course locked down in position on a tripod. I held the aperture constant (f/22), and made ten expsoures, varying the shutter speed between two seconds (the rocks) and 1/10 of a second (the brightest part of the sky). 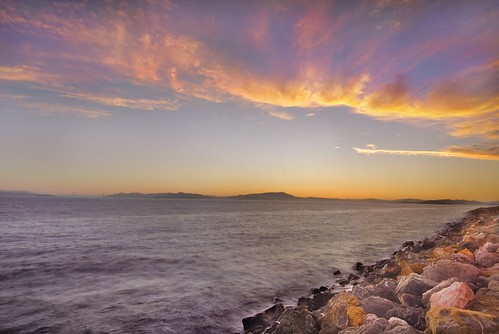 I tucked the set of exposures in a single folder (so I could add them all to the HDR automation in one fell swoop). When I looked at them in Bridge, I felt that the dark rocks were still too dark, even with the two second exposure. So I opened all the images in Photoshop, using a generic color balance setting for the RAW conversion, and opened (and saved) several versions of the exposure outliers, manipulating the RAW conversion to create an even greater dynamic range between the files.

After all this fuss, the results of running the HDR automation weren’t terrible, but I wasn’t thrilled. Photoshop also sent me up a notice saying I’d do better with straight, unconverted RAW files, so I tried the experiment again, doing it Photoshop’s way this time. These second results really were terrible.

I tried some pretty wild approaches to fixing the automated HDRs, including combining them and/or combining in some of the original images. However, Photoshop’s image alignment when it did the HDR automation had me very slightly out of register with the original images, so this didn’t really work.

OK, so I’m coming to the conclusion that I’ve come to before: combining images and image variants is something that humans do better than software (at least for the time being). I created the version of the image above using four layers processed at various exposure settings from one of the RAW “negatives” calibrated for the sky, and adding a layer from the two second version (calibrated for the dark rocks). A steady hand and the Photoshop Paintbrush tool is crucial for this kind of thing.

Is this really HDR? I’m not exactly sure: while it does extend the dynamic range of the original capture, it’s really more like a digital version of the zone system: exposing for the the highlights and processing for the dark areas. 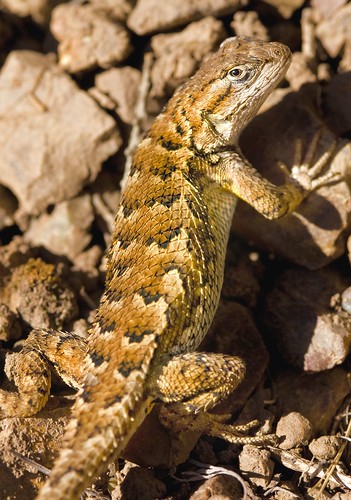 We were sitting on top of Battery Townsley above Rodeo Beach in Marin Headlands. Somewhat aptly, I was reading to Julian from H.M.S. Surprise, the third volume in the Aubrey-Maturin series. The sun was coming in and out of the fog, shining brightly if obliquely when present.

All of a sudden, Julian pointed out this lizard to me, hiding under a low bush. I quickly got out my camera, and boosted the ISO to 400 so I’d have a crack at a handheld shot. Just as I was ready to make my exposure, the lizard turned his head towards me, and his eye glinted for a moment in the sun.

Related story: No Time to Be Lost. 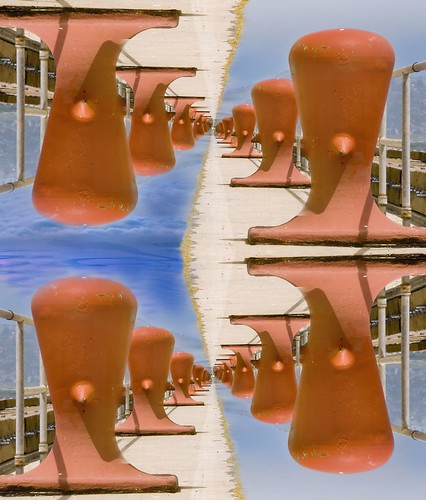 I photographed these stanchions on a pier at Fort Mason in San Francisco. Yesterday I set out to make an infinite progression of the stanchions. Somewhat like the endless doorways in World without End or the stair without end in Endless Stair.

But the lines of perspective didn’t really work. So I flipped the image this way and that, and noodled and doodled the afternoon away.