This is a photograph of Bodie Mercantile, the old general store in the ghost town of Bodie. In creating this image, I wanted to be very sure that I exposed the scene in such a way that it looked like night. In other words, if you open an exposure up enough, no matter how dim the lighting is, you risk coming up with a night scene that looks almost like day. (For example, in an image of the old Standard Mill at Bodie I intentionally created pseudo day during the night. Other than the star trails, it’s not obvious that it is a night shot.) 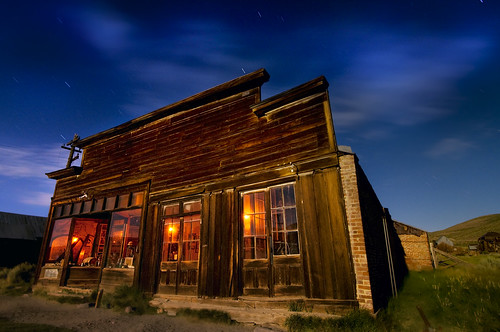 If you are looking for night photos that pack punch and provide visual drama, how do you achieve this? It turns out that one answer is to avoid average exposures.

When you are having a baby average, or “normal,” is good (unlike the birth of Katie Rose). And getting a life back to “normal” is usually good. But when you are creating a photograph, why be normal? Normal is average. Normal is mediocre. Normal is what you get from programmed automatic modes on a digital camera (except in spot mode). Normal exposures won’t win you any “oohs” and “aaahs” even when your subjects are beautiful or interesting.

I’ve been thinking about normal exposures (and why I don’t do them, and you don’t want to do them) following a question in the Bodie workshop where I was a guest.

The question: “Why do you bunch your histograms up on the left?” This was a polite way of asking why I often underexpose my images. Since an exposure histogram is a graph of the distribution of exposure values in a photo, orthodox teaching is to aim for a middle-of-the-road histogram with a bell-shaped upward swoop in the center (which should not quite reach the top), trailing down on both the left and the right. Here’s the way the exposure histogram for the Bodie Mercantile photo looked, accepting the default settings in RAW conversions:

You’ll see this histogram is bunched on the left. There are hardly any lines on the right. In other words, you can tell from the distribution of exposure values that this photo is underexposed by conventional standards. (Worth noting: the histogram also sports a warning icon, as it did in camera, telling me I am a naughty boy in exposure terms.)

Middle of the road is middle of the road: it is not particularly striking or interesting. Underexposure, as denoted with left-boased histograms, lets me bring out colors in an image as a build it up by boosting exposure values in the conversion process.

It’s not just this photo. Generally, if you looked at my exposure histograms, you’d find almost no orthodox middle-of-the-road bell curve distributions. In fact, I either bunch to the left (more commonly) or to the right (in some cases).

Bunching the histogram to the left is for overall underexposure, or for selective underexposure and/or to bring out the color saturation of images. This kind of exposure also helps me avoid highlight blowouts: I can process for shadow areas, but it is much harder to deal with areas that have gone white and lost all detail.

You’ll find many examples in my work where the original in-camera exposure histogram looked pinned to left side; for example, among my recent captures, Tennessee Beach at Night.

When I’m interested in created a backlit, transparent, high key lighting effect I tend to end up with an in-camera exposure histogram that is pinned to the right side (indicated an overall “overexposure”). For example: this White Anemone.

My point isn’t to knock digital in-camera light meters, which are very accurate. It’s that the astute photographer realizes that the information presented by the light meter is only a data point. Using a setting derived on an averaging basis (which is what in-camera light meters do outside of spot mode) leads to average results. Why be normal? “Good” photographers may go to heaven, but “bad boy” exposures create images that have the most fun.