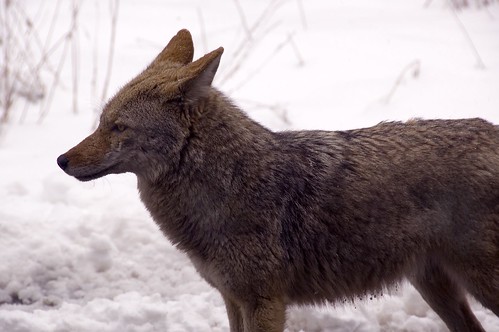 Myths about Coyote are prevalent in Native American culture. These stories vary, but Coyote is often wily, sometimes the creator, and almost always a trickster. Sometimes benign, and sometimes a bit mean, but always cunning and tricky.

For me, the Coyote represents chance, or serendipity, in my life. I ignore Coyote at my peril, but when I follow him I am in for an unexpected ride.

I photographed this coyote in Yosemite Valley. Julian, my eight-year-old, and I had a strenuous morning hiking in the snow. (You can read about our snow shoe hike the previous day here and here.) 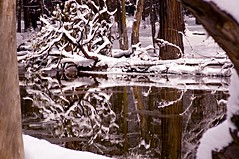 All too soon, snow squalls started coming in gusts, creating a wild world of blowing snow, with clearing but fog creeping coldly into the valley:

We had a great time, but withdrew to the yucky “food court” at Yosemite Lodge for lunch, and some respite from the weather.

After lunch, I asked Julian what he wanted to do. He said, “Dad, I’ve had a great time here, and I love the snow, and I know I’ll miss it when we’re not here any more, but can we go home now?”

I think the wildness of the weather was too much for him. I said, “Sure!”

We loaded up the car, and headed down the valley in the snow, tire chains thumping. Near El Capitan meadow, the coyote was walking serenely along the road. His winter coat was full and glossy. I opened the window to take his portrait. Julian yelled, “Daddy! Don’t let him in the car!”

Once I reassured Julian that I had no intention of letting him in, he calmed down and got interested. I looked at Coyote, and the coyote looked at me. I snapped a photo with my 18-200 mm lens (according to the Exif data set at about 100mm). I’m including this information because lots of people have asked me what long lens I used to get so close to the creature. Obviously, it wasn’t such a long lens, but rather the fact that I was close to Coyote.

The coyote nodded at me, and resumed his explorations. I suppose he was walking in the road because it was easier than navigating the deep snow in the meadows.

Now I’ll just have to see what tricks Coyote has in wait for me!

This entry was posted in Bemusements, Photography, Yosemite.