A Pixel Is a Pixel 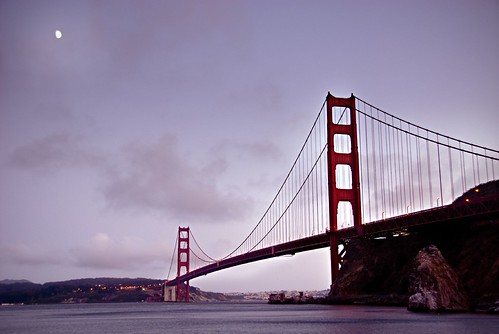 I post-processed this photograph of the Golden Gate Bridge by early moonlight from Fort Mason by sandwiching four different conversions from the RAW negative using Photoshop layer masks and the Paintbrush tool.

Recently, Reuters photographer Adnan Hajj was in the news when he was fired for manipulating a photo of Beirut being bombed by an Israeli air raid. Based on the photos published in the New York Times story, Hajj used a clone tool to crudely amplify the plumes of smoke coming from downtown Beirut. It’s not clear whether the purpose of the digital manipulation was politically based, or rather (more likely) to make the manipulated photograph more salable.

These two photographs (mine and Hajj’s picture of Beirut burning) are very different in content and purpose. Why do I bring the digital manipulation of these two wildly divergent photographs up in the same story?

Because all digital photographs are manipulated, either by software or the software’s operator. A pixel is a pixel. The processor in a digital camera manipulates the photo when it captures and saves a RAW image, and manipulates it more if it converts it to the JPEG format. And a photographer with the time, effort, and skills can “paint” a photograph pixel by pixel. Or use higher-level tools to paints pixels with greater efficiency and subtlety. As I did in my photo of the Golden Gate Bridge and Adnan Hajj did in his photo of the war in the Middle East.

So all digital photos are manipulated. What are the morals of this sea change for photographers, photo editors, and those who simply look at photos?

For photographers, just because you can manipulate an image doesn’t mean that you should do so. There’s a different duty of care and responsibility on a news photographer like Adnan Hajj, whose goal is to is to accurately portray current events, than there is on me since my goal is to produce aesthetically pleasing images. At the very least a photographer should be prepared to state whether an image has been manipulated in post-processing. Furthermore, if an image is represented as an accurate portrayal, then any manipulation should be “honest.”

I am prepared to state right now that every single photograph of mine has been manipulated. Can we all say together that digital captures straight from the camera don’t look terribly good? Unmanipulated digital photographs miss nine tenths of the potentiallity of this exciting new medium, which combines photography with digital manipulation.

Of course, if you grant that some post-processing manipulation is required for all photographs, honesty in this manipulation is a very subjective matter. This puts photo editors in a very tough position. In the New York Times article about the Adnan Hajj affair, Jonathan Klein, the chief executive at Getty Images, the world’s most important stock photo agency, is quoted as saying that the only way to avoid problems like the Hajj manipulated photos is to “employ people of integrity” and if there are abuses “not only take action, but take visible action.”

Making an example of digital malefactors is shutting the barn door after the equine creatures, digital or otherwise, have escaped. It won’t really stop the problem. In the case of the Adnan Hajj photos, the manipulation is pretty obvious at sight to anyone who is familiar with way cloning works. So photo editors need to be better educated about how software like Photoshop works, and how to spot manifestation of manipulation.

It sounds like one of the reasons that the Adnan Hajj photos got published was that the process was rushed. Slowing down and really looking is a partial solution to this issue. More important, organizations that are vouching for the verasimiltude to life of their imagery need to implement workflow that helps to guarantee the authenticity of the process.

Everyone who looks at photographs—and that is all of us—needs to know that digital photographs are artifacts that can be constructed one pixel at a time (or using tools that operate on pixels in bulk). It has always been possible to manipulate photography, but with digital photography it is necessary, easy, and sometimes very hard to detect. (Of course, the fakery is not hard to detect with the Adnan Hajj photos.)

There’s also a thin line between manipulating a news photograph in post-processing, and staging an image. There have long been charges that some of the most famous examples of war photography have been staged, going back to the heyday of silver halide photojournalism.

Skepticism is called for. The further implication is that the context of the photograph (and the person or organization vouching for it) has become increasingly important.