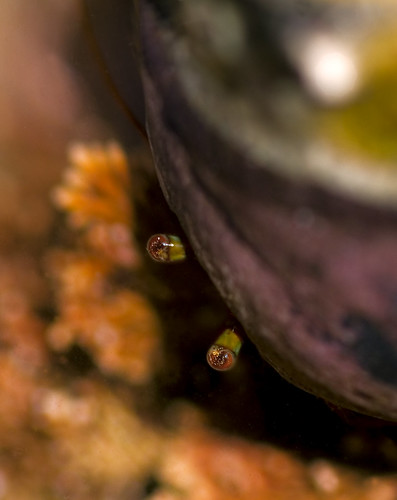 Mark and I thought it would be fun to photograph the tidepools along Duxbury Reef at low tide. Duxbury Reef lies off Bolinas near Point Reyes.

My mistake was looking at the Point Reyes Park Service map, which has Duxbury Beach clearly marked. The best access to Duxbury Reef for tidepooling is actually at Agate Beach. It looked to me like there was a half mile trail going down to this Duxbury Beach. Mark and I agreed to meet at the parking lot, we both had work to get done. As it turned out, there was no parking lot (only a shoulder of the road), and no trail to Duxbury Beach (only a cow path). And Mark had car trouble, so I got there well ahead of him.

I cruised down Mesa Road along the Bolinas plateau towards its dead end parking lot at Point Reyes trailheads, but I couldn’t find the supposed trail to Duxbury Beach. Finally I stopped at the coast guard station that lies within the park boundaries to ask for directions and to use their toilet.

This was a somewhat odd experience. The coast guard people had to buzz me in through a series of doors. Inside, there were posters about homeland security and uniformed people sitting around watching television and talking to me about the protocol they needed to use when they had a visitor (that was me).

I took my much needed visit to their bathroom, and then asked if they could point me to Duxbury Beach (they thought the trail to Duxbury Beach might be about three quarters of a mile down the road but weren’t sure) and if they knew when was low tide (they had no idea). It really struck me as odd that a coast guard installation knew neither about local beaches nor about the tides.

I went back down the road a ways, found a pull over spot near a small creek. The watershed seemed to trend down toward the beach, and there was a gate through the fence into a field with hundreds of cows, along with a display sign about Duxbury Reef. “Aha,” I thought, “I’ve found it.”

Mounting my camera pack on my back, I headed across the field, cows scattering in front of me (cows are certainly messy animals!). In a half mile or so, I reached the ocean, or rather the cliffs above the beach. Maybe I could have got down without injury, but it looked dicey. This was obviously not the right spot, so I retraced my steps.

As the last cow fled before me and I found the road again, Mark pulled up. We agreed that the thing to do was head back down the road to Agate Beach.

By now, it was a little past low tide. The exposed reef at Agate Beach was very beautiful, but the tidepools seemed a little empty of life. As we looked further, we saw anemones, starfish, and even hermit crabs.

It’s clear why the fellow in the photo is hiding: some guy is sitting above his shell with a tripod and a long macro lens clicking a shutter. But what about the coast guard station? I’m assuming it’s not there to protect the coast in the tradional way with boats and rescue operations (if it were, they would know about beaches and tides). So is it hiding something?

This entry was posted in Bemusements, Photography, Point Reyes.