On a hot and humid day in March of 1957, forty-two men armed with sub-machine guns, carbines and automatic pistols crammed into the back of a small delivery truck. Two other vehicles, a Buick sedan and a Ford roadster, each with four armed men in shirt sleeves, accompanied the van. The assault on the Presidential Palace in downtown Havana, Cuba was on. 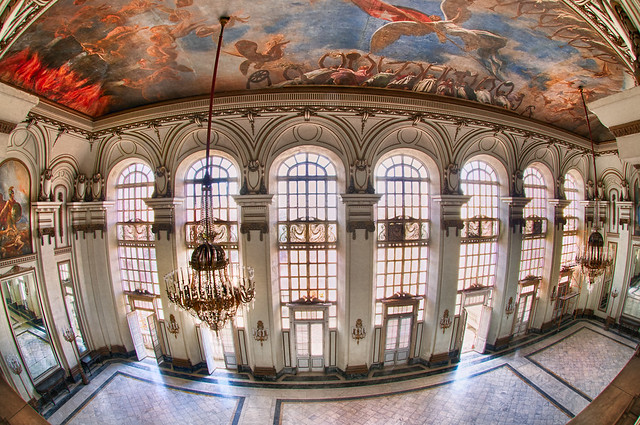 At the Presidential Palace, strongman Fulgencio Batista waited in the the Hall of Mirrors (shown in this photo), reading a book to pass the time. Batista knew the attack was coming because an informer had given the conspiracy away.

One of the odd things about the Hall of Mirrors is the ceiling mural. You can clearly see the flames of Hell on the right of this painting. As they say, the Devil is sometimes in the details.

It’s not entirely clear what the point of the moralizing in the art was to the corrupt Battista dictatorship—or why this monument to corruption has been meticulously maintained in a country in which everything else is falling apart.

My sense is that there is an underlying morality play related to the Halls of Mirrors and its mural. Whatever the regime, and whatever the country, power corrupts. And absolute power corrupts absolutely.

Read more in Fifty Years after the Cuban Revolution.

This entry was posted in Cuba.