The Day My Daughter Was Born

Author’s note: I wrote The Day My Daughter Was Born shortly after Katie Rose came home from the hospital, about three months after she was born. This is an account of her birth from my somewhat narrow viewpoint; see The Birth of Katie Rose for more of her story. 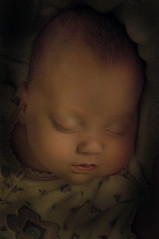 I was feeding the boys dinner when the phone rang. It was Dr. Katz, my wife’s obstetrician. “Phyllis is going into labor,” he told me. “You need to get to the hospital.”

A few days earlier, at twenty-four weeks pregnant, Phyllis’ water had broken. Fluid seeped out all over our bed, and we had rushed to check her into the hospital. At that point, they told us it was still possible that delivery could be delayed using powerful drugs. In case the drugs didn’t work, we had a consultation with a neonatologist, Dr. Lee. Neonatologists are intensive care doctors for newborns. Dr. Lee told us that if our daughter was born at twenty-four weeks her chances of survival “with an acceptable life style” would be in the “low single digit percentages.”

Of course, I was hoping that the drugs they were giving Phyllis would work to stave off labor and delivery. But in my heart of hearts I was not astounded to get the call I dreaded from Dr. Katz.

It took me an hour to get the kids to bed, and to get my parents over to our house. It was another hour to drive across the Bay to the maternity campus of California Pacific Medical Center (CPMC) in San Francisco.

The hospital specializes in labor and delivery care. Individual birthing rooms are setup so they can be used for operations if anything goes wrong and they are needed.

When I opened the door to my wife’s room, it looked to me like a vision of hell. The lights were dim. On one side of the room Phyllis was shivering in the grip of a high fever and moaning in pain.

At the other side of the room, a team of specialists worked on our daughter. She had been born, more dead than alive, before I got there. Besides Dr. Katz, there were two neonatologists, a team of nurses, and a respiratory technician.

My daughter was blue, limp, and not breathing. Her head was the size of a small lemon, and her body was about a foot long. She was a pathetic and apparently lifeless little thing. As I watched the proceedings, I kept thinking that I didn’t want her to suffer unnecessarily.

After about twenty minutes of trying to bring the limp baby back to life one of the doctors suggested it was time to shut down the effort. But Dr. Katz and the other neonatologist, Dr. Chris, insisted on continuing.

My face was wet with tears. I squeezed Dr. Katz’s hand and said I didn’t want to see her suffer if she was brain dead anyhow. “You never know,” he said, “let’s see it through to the end.”

Dr. Chris also said it was too soon to stop. “There will be time enough later to shut it down,” he said, “if that’s the right thing to do.” 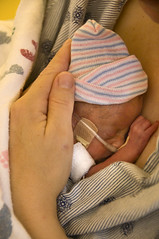 I assumed my baby was dead, and turned my attention to my wife. Phyllis’ fever had spiked to 105 degrees, she was having trouble breathing, and her heartbeat had become irregular. She was on IV drips with various medicines, and using an oxygen mask to help her breath.

Dr. Katz took in the situation with Phyllis and decided she needed to be moved to a hospital with an adult intensive care unit.

The first step in this transfer process was to wheel Phyllis on her bed, with her IV drips attached, out of the birthing room and into a special maternity recovery room. The anesthesiologist who had helped with the delivery came by the recovery room and gave Phyllis a shot of morphine, which helped a bit. A critical care nurse was assigned to monitor Phyllis and to organize the ambulance trip to the CPMC campus with a cardiac intensive care unit.

The nurse got on the phone to “authorize” the transfer. Time went by, and more time, and then she was on the phone to someone else about it. Phyllis was getting worse. The most frightening thing for me was that Phyllis didn’t seem to know me, or to care whether she lived or died. She was part way to an acceptance of her own death.

Meanwhile, the nurse’s inscrutable bureaucratic phone calls continued. Finally, I had had enough. “Just get her there,” I yelled. Finally, things started to move.

I rode in front of the ambulance with the driver. Phyllis was strapped behind in the care of the nurse and the other ambulance attendant.

As the siren blared through the nighttime streets of San Francisco it seemed like a lifetime since I’d left our kids and house, but it was really only a few hours. The ambulance driver was proud of his shiny, new vehicle. He showed me the switches that activated different siren sounds and the dome light. When he congratulated me on the birth of our daughter I said, “But she’s dead.”

When we got to the other CPMC campus, it took some time for the ambulance attendants to find the cardiac intensive care unit within the hospital because, it turned out, this was their first day on the job.

Finally Phyllis was in the right hands. The ICU doctors began massive doses of antibiotics and stabilized her heart. It turned out that her placenta had been infected with antibiotic resistant E. coli bacteria, and that Phyllis had gone into septic shock when the infection hit her blood stream during delivery, but we didn’t find this out until later.

On the cardiac ward, in bed next to Phyllis, an old person was dying alone and complaining to the world. Phyllis was heavily sedated, and beginning to do better. It was about 3AM. I decided to get a little sleep. They gave me a blanket and I took it to a darkened waiting room. Friends and relatives of those in intensive care where sleeping across the chairs. I stretched out on the floor in a corner, unbuckled my belt beneath the blanket, and listened to the snores for a while before passing into an uneasy sleep.

When I got up a few hours later I went to check on Phyllis. She’d been moved out of the open ward to a more private cubicle with a window. She was sleeping, so I wandered out of the hospital to get a cup of coffee, and watched a gray and cheerless San Francisco dawn arrive.

When I went back into the ICU, Phyllis was awake. She was watching pigeons on the window ledge outside her dusty fourth floor window.

“Whether she is dead or not, our daughter deserves a name, “ I said.

I kissed Phyllis, and got on a shuttle bus back over to the maternity hospital. The morning fog was scattering in wisps and a beautiful golden light bathed the tops of buildings.

At the hospital I went up to the NICU (newborn intensive care unit) and told the charge nurse that we wanted to name our daughter. I used the same line: “Whether she is dead or alive, she deserves a name.”

The nurse brought me over to an incubator. “You have a beautiful baby daughter,” she said. “It took an hour to resuscitate her, and she’s on a ventilator now. But she’s doing fine. What’s her name?”

They made a big, colorful sign that said “Katie Rose, and taped it to her incubator. Peering through the clear plastic porthole, I saw a tiny baby (she weighed less than two pounds) with almost transparent flesh, barely human, connected to myriad tubes and wires. 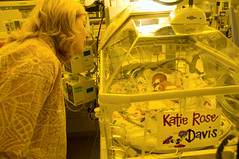 I took a look around at the NICU, this foreign land of medical monitors and alarms, of babies who grow well and go home, and others who don’t make it. For my Katie Rose, the journey was just beginning. 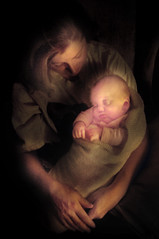 Afterword: Katie Rose is doing just fine. See Catching up with Katie Rose for some end-of-2008 photos of a happy, healthy baby girl. 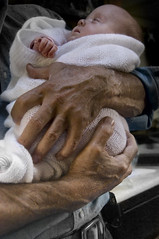 This entry was posted in Katie Rose.