Nautilus in Black and White 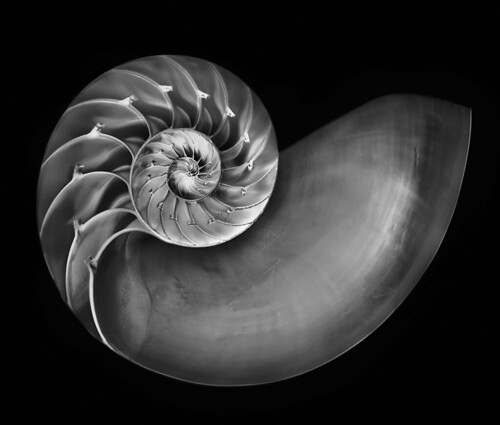 Nautilus in Black and White, photo by Harold Davis. View this image larger.

Finley Eversole contacted me for permission to use one of my chambered nautilus images in his book Art, Death and Transformation, to be published by Inner Traditions in 2009. Based on my conversation with Finley, he’s a man with personal experience of the abstract expressionists. I gather that his book is about the relationalship of the spiritual to art, particularly in the context of mid-twentieth century art. There’s an extensive discussion of Robert Smithson’s famous Spiral Jetty, constructed in 1970 and located in the Great Salt Lake, Utah.

In the context of Spiral Jetty, Finley wanted to illustrate spirals in nature, hence my chambered nautilus image. The catch was that he could only reproduce my image in black and white. Here’s the original image in color (you may notice that the black and white version is rotated).

I undertook the conversion to black and white myself because I was afraid that anything like a straight RGB to Grayscale switch would result in a murky image that lacked contrast. Converting RGB to Grayscale simply throws away the color information in the image, much as will happen when you discard the AB channels in LAB mode. Getting a little more sophisticated than this, I converted using a black and white adjustment layer. On the default settings, the results were predicably flat. Using the so-called Ansel Adams settings (explained here) and a channel mixer adjustment layer, I got slightly better results. By the way, my new book Light & Exposure for Digital Photographers from O’Reilly includes a case study that visually shows the impact of various black and white conversion techniques.

So I realized I needed to do a great deal of preparation, and essentially change the contrast structure of the image, before discarding the color information. I put the image through a variety of steps, but the most effective was the selective deployment in tritone mode (also explained in Light & Exposure and see Toned), using black, white, and Pantone metallic silver as the three colors.

By the way, I am planning to make prints of both the black & white and color versions of this image, so please let me know if you have an interest in owning a print.

The spiral represents the unfolding of our hidden creative powers and symbolizes both self-realization and boundless expansion. Its secret is beautifully dramatized by the chambered nautilus whose in-dwelling life unfolds cyclically and periodically, mirroring in itself the expanding spirals and eternal patterns of the evolving cosmos.

This entry was posted in Monochrome, Photography, Photoshop Techniques.